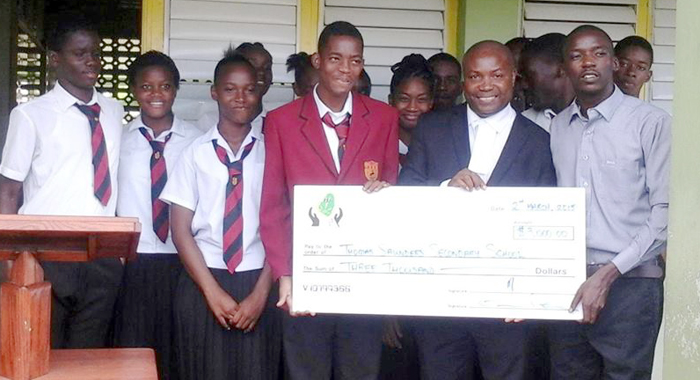 The Kingstown Co-operative Credit Union Ltd. this month presented to the Thomas Saunders Secondary School a cheque for EC$3,000 in support of the students attending this year’s Penn Relays in Philadelphia.

The credit union said it is proud supporter of the school, named for one of its founding fathers, Thomas Saunders, who served as president of the credit union from 1973 to 1977.

Terral Mapp, representing the board of directors, made the presentation. He said that it gave him great privilege to award the donation not only because of the late Thomas Saunders being a common development factor, but also because this school, though still very young, has been exceptionally successful at track and field.

“The Thomas Saunders Secondary has won the inter-school athletics meet numerous times and is the first school here in St Vincent and the Grenadines to participate in the Penn Relays, with this year making five consecutive years of participation,” Mapp said.

Mapp also highlighted that KCCU, mindful that its own financial health is heavily dependent on the health and the development of the economy and the society, is committed to contributing towards nationwide development.

“We are partnering with schools and other institutions across this beautiful country in an effort to economically improve our society. “We are investing in you (the students) so that you can, one day, make your mark on the world,” Mapp said.

“I wish those students participating a successful journey, as they go out as ambassadors of their school and of St Vincent and the Grenadines – Give your best and nothing short of,” Mapp said.