Fireman fears his house will collapse 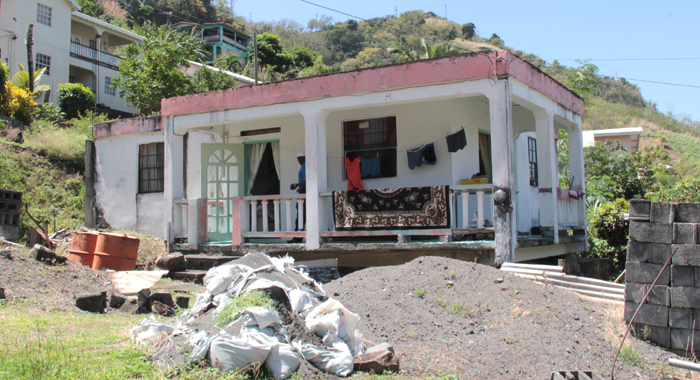 Firefighter Paul Smart is afraid that his house, located in Ottley Hall, might collapse. (IWN photo)

A 25-year veteran of the Police Force is seeking the assistance of the government to repair his house, which he fears might collapse.

Paul Smart, a sergeant of police attached to Fire Department, built the concrete house in Ottley Hall in 2002 on lands he bought from the Development Corporation.

A retaining wall at the lower end of the property collapsed in 2004 and Smart said he is yet to received assistance promised by state agencies.

But after the earthquake in 2007, the house began to exhibit signs of structural failure, seemingly exacerbated because of poor construction.

Chunks of the underside of the concrete roof have begun to crack off, exposing the rusting steel reinforcement.

The firefighter told I-Witness News that this past week he was almost struck in the face by a piece of falling concrete.

“I have a mortgage paying and it is very hard for me to do my repairs on my own,” he said.

“… in 2007 when we had the earthquake, my house was shaken, and after the earthquake, I discovered some strange things happening to the house, wherein I saw cracks, and the cracks began expanding more and things keep bursting through the concrete,” he told I-Witness News.

“Right now, I am scared to live in here,” he said. “I am not looking for gold or silver from the authorities but I need some assistance.”

Smart said builders told him that the house might have shifted during the earthquake.

But he said that poor construction is also part of the problem.

“I do believe that some poor work was done on my house, but it is very sad that the person who built my house has passed on — died. And this is getting to me. It is very ridiculous and I cannot wait any longer, because up to last night, … a piece of debris fell and just missed my face. Had that caught me in my head, probably I would have been knocked out,” said Smart, who lives alone.

He said the roof is also caving in.

“Who knows, the next shower of rain comes what would happen. I have lost my computer; I’ve lost dining room set; I’ve lost a lot of clothing. A lot of things have been destroyed,” he said.

Smart said he is looking for “relocation or whatever they can do to assist me”.

Smart agrees that the problem is not the fault of the authorities.

“But I believe I am not the first and the last person who have gotten damaged and need some assistance. I believe that some poor work was done, but nevertheless, where help is concerned, help should be given at any time,” he said.

He said that an assessor from the Ministry of Housing is said to have visited, but he was not at home at the time.

“My concern is my personal health and protection. You never know. I might be sleeping at night and something happen – this (roof) drop in (collapses) on me.”

Smart said he submitted an estimate for the repairs to the Office of the Prime Minister last year and a secretary there said that he would not be able to get all he asked for.

“I said no problem. I’m just asking for assistance. Whatever I get I will be satisfied. But up to now, nothing has come through so far,” he said.

3 replies on “Fireman fears his house will collapse”