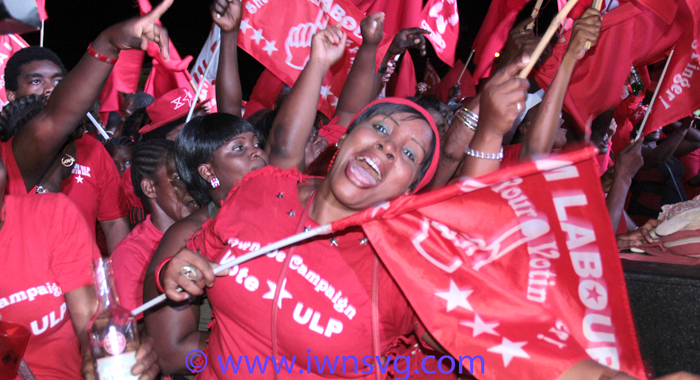 The ruling Unity Labour Party celebrated its 14th anniversary in office with a mass rally in Calliaqua Saturday with many of the speeches being a celebration of the party leader, Prime Minister Ralph Gonsalves.

The speakers also outlined the party’s achievement over the 14 years in office and told party supporters and media audiences that while some voters are saying its time for a change, that change came in 2001 when the party was elected to office.

The celebrations come as the party prepares to ask voters for a fourth consecutive term in office in elections widely expected this year, ahead of the March 28, 2016 constitutional deadline.

The main contender is the New Democratic Party (NDP), which has seen its popular votes and number of seats in parliament increase even as the ULP has witnessed opposite fortunes.

“In fourteen years, we have seen remarkable change here in St. Vincent and the Grenadines. Some say they are ready for change, but the change has happened in 2001, and will continue to change the lives of the poor and ordinary people on St. Vincent,” said Carlos James, a political novice, who will represent the ULP in North Leeward.

“I am privileged to be given the opportunity to serve under a man who I can only learn from to improve the constituency of North Leeward, and by extension, St. Vincent and the Grenadines,” James said.

“Comrades, you have heard the clarion call to get on your marks, but we have to be ready, we have to be prepared, we have to put ourselves in motion for an elections that is going to be the mother of elections here, a historical fourth term for the Unity Labour Party,” he said.

“One more for De Comrade,” he said, in reference to Gonsalves, adding that North Leeward is ready and urged other constituencies to ensure voters register ahead of the elections.

“Let us take this fourth term and give the comrade leader the ultimate gift, the gift of a fourth term in the next general election,” said James, a lawyer.

Clayton Burgin, MP for East St. George, where the rally was held, will exit electoral politics at the end of this term, after three terms as area representative.

He praised Gonsalves for the confidence placed him as head of various ministries, including Education, Transportation, Housing, and Health, which he currently holds.

“Under the leader of comrade Ralph Gonsalves, I have gained a lot of confidence. I have learnt. And if you are with this man and this party and you ain’t learn anything, something wrong with you,” said Burgin, who has given way so that the Prime Minister’s son, Minister of Foreign Affairs, Camillo Gonsalves, could become the candidate for East St. George in the next general election.

“You must learn when you have a leader such as Dr. The Honourable Ralph E. Gonsalves,” said Burgin, a former educator.

“He has been there for me all the years, and I thank him sincerely for all the confidence and the trust that he placed in me over those many years,” Burgin said.

He told constituents that while he is not contesting the next elections, he is not going anywhere, but has given them, in Sen. Gonsalves, “the best man that you can ever have in East St. George”.

“… we are coming out with full force and we want to show the NDP that Labour is here to stay,” Burgin said.

Sen. Gonsalves noted the changes that the ULP has made to its slate of candidates since 2001.

“When we go to the polls in the next elections, only two candidates will have been in every victorious election of the ULP from start to finish,” he said in reference to Prime Minister Gonsalves and MP for North Windward, Montgomery Daniel.

“So when I look around and I see some little cheap posters in Calliaqua saying that it’s time for a change, this is the change! The ULP is the change! And we continue to change and update ourselves for the next election,” he said and named some of the new candidates, including James, Sen. Jomo Thomas, and Sir Louis Straker, who has come out of retirement after five years to run in Central Leeward again.

“When they talk about change, tell them look at the Unity labour Party, the Unity Labour Party is the change to take the country forward,” Sen. Gonsalves said.

Meanwhile, Prime Minister Gonsalves presented the NDP as lacking in vision and opposing every attempt that his government has made to do “big things”.

“But all these bottlenecks constitute a chasm. … You ever see a big wide gully, you can pass over that in baby steps? You have to jump, you have to have the faith, and the creativity and the mind to do the jump,” Gonsalves said.

He said faith is made complete by works.

“And the work we are doing is the Argyle International Airport and the Education Revolution and the geothermal and the city which we will build at Arnos Vale … when we move the airport to Argyle.”

Gonsalves appealed to voters to give his party a fourth term, saying that the electorate should not remove him as prime minister “without compelling reasons”.