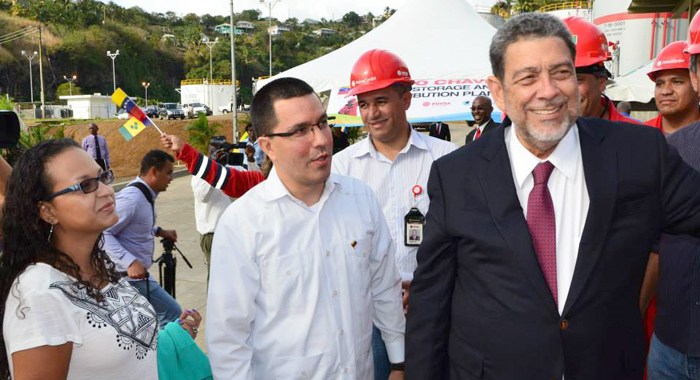 St. Vincent and the Grenadines and other Caribbean nations must not be asked to choose the United States or Cuba and Venezuela, Prime Minister Ralph Gonsalves says, adding that some persons take an “either or approach to live”

“… why should we do that? We have been taught to embrace Jews and Gentiles, the Law and Grace,” he said this week at the inauguration of the Venezuela-funded US$31.6 million Hugo Chavez Fuel Storage and Distribution Plant at Lowmans Bay.

Gonsalves said the nations of the region are friends of Cuba and Venezuela and are well-placed, as honest Caribbean countries, to be “honest brokers and interlocutors when sometimes our friends have quarrels.

“We are well-placed so to do, but, for persons to accept us, they must concede to us our right to self, mastery, our right to independence. We cannot be asked to give up our manhood and our womanhood and to turn askance to be friend of anyone,” he said, adding that anyone who asks otherwise wants the region “to be a vassal rather than a friend”.

The spirit of Thomas Jefferson and James Madison, founding fathers of the United States, is of freedom and the right of a free people to make their own independence, Gonsalves said.

“And that is the foundation stone from which we started. Those are the ideas that underpin the laying of the stone here in 2007 in February, when President Chavez came to visit us and we became a member of ALBA,” he said of the fuel depot.

“This is not a matter which burns deeply in the political directorate of this country. It is in the heart and minds of people in this country. Persons without any ideological bias who look to the deeds of men and women and come to their own conclusions,” he said.