Man picks up hundreds of dollars in pennies across St. Vincent 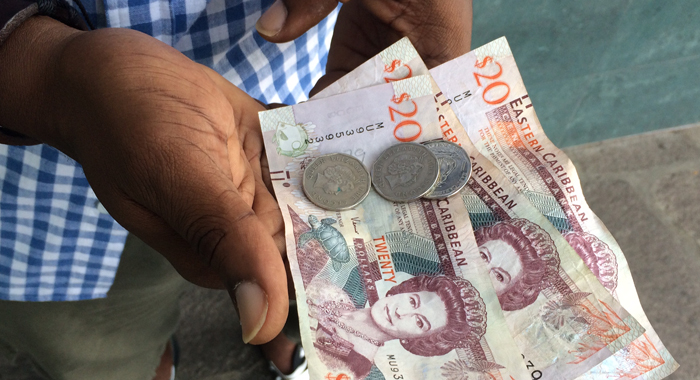 Sean Jack this week converted to larger denominations the EC$63 in pennies he picked up across SVG over the past half year. (IWN photo)

How many one-, two-, five-, or ten-cent coins have you thrown away or dropped in St. Vincent over the last five years or so?

Well one man has been picking them up and they have added up to several hundred dollars.

The man, Internet marketer, Sean Jack, spoke to I-Witness News this week shortly after converting to bills and one-dollar coins the coins he has picked up across the country over the past few months.

The total value of the last transaction? EC$63.

“It’s something I have been couple years now, picking up one cent, two cents, five cents, ten cents. I don’t normally save the 25 cents. I use them. But the other coins, I saved them over a period of time [then] change them at the bank. I ended up with this morning 63 dollars,” he told I-Witness News.

He said he began the habit five to six years ago.

“A friend went to the United States — living there, he told me every time he meets change he picks it up and over time he got seven hundred and fifty-something dollars in coins. So, I said, ‘Alright, it’s money; dollar for dollar. St. Vincent ain’t no exception so then I started to do it,” Jack told I-Witness News.

He also spoke of the reaction he gets from people when they see him bending down to retrieve the coins from the street. “’Man leave that, that is for the sweeper. That is just a penny.’”

“But then I know the end result, so I encourage people to save. Save not only in cash, but save in something precious or some precious commodity,” Jack said.

And how much money has be picked up in coins on the street?

“More than a thousand dollars,” he told I-Witness News.

He said he has used the money to pay bills several times.

As for the latest EC$63, Jack said he will give it to his 11-year-old brother-in-law, a student at a primary school in Kingstown to put into his savings.

The child is also in on the coin collection drive and deposits hid findings into his savings, Jack said.

Jack’s habit is reminiscent of a Kingstown store owner who walked around the store and picked up the one- and two- cent coins that customers threw to the floor after paying for his good.

“You own the store, why are you picking up these coins, one of his employees asked.”

“This is money, and money makes people rich,” the businessman responded.