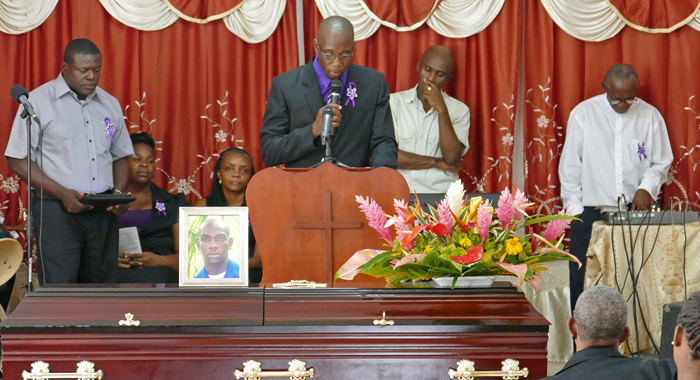 The family of an HIV-positive man who died recently is encouraging persons to support their relatives who are living with the disease.

“As you can see from my brother, people who contract HIV can live for a long time, if they take their medication … and if they are in a loving, caring environment,” journalist Kenton X. Chance said Sunday at the funeral of his younger brother, Alex “Nick” Chance, who died almost 10 years after testing positive for HIV.

Alex, 32, died on April 7 of kidney failure, brought on as a consequence of HIV. Cirrhosis of the liver also contributed to his death.

“It is no secret that my brother was diagnosed with HIV about 10 years ago,” Chance said as he delivered the eulogy during the funeral service at Rillan Hill Church of the Nazarene.

“After the initial shock, and with the support of his extended family and friends, he picked himself up and lived as full a life as one could expect in the circumstances. In fact, a fuller life than many might expect,” said Chance, who is also Executive Editor of I-Witness News.

“He worked for many years — in fact, up until a year ago — at the St. Vincent Brewery, providing for himself and building his own dwelling quarters.”

Chance said that his brother was not only physically strong, but was emotionally and psychologically strong as well.

“In fact, he is the strongest person I have ever known personally,” he said in reference to his brother’s attitude to his illness and failing health.

Nick began to exhibit signs of kidney failure during the first third of 2014.

Chance spoke of how convinced his family was that his brother would have died shortly after he initially tested positive for HIV almost a decade ago.

He, however, went on to explain how his family had provided a loving, caring and supportive environment for his brother after he recovered from that initial bout of illness.

“And if I might say, you can’t get HIV simply by sharing utensils or living in the same space as someone who is HIV positive,” he said.

“We are very open about our brother’s health upon his death as he was about it in his life. It is only by talking about HIV/AIDS and hearing the experiences of families like ours that we can help to fight stigma and discrimination,” he said.

He noted that his mother, Patricia Chance-Hoyte, is an employee at St. Vincent Planned Parenthood Association. Her job includes condom distribution, “partly to try to help to ensure that as few families as possible experience what we have experienced,” Chance said.

2 replies on “Grieving family urges love for persons with HIV ”