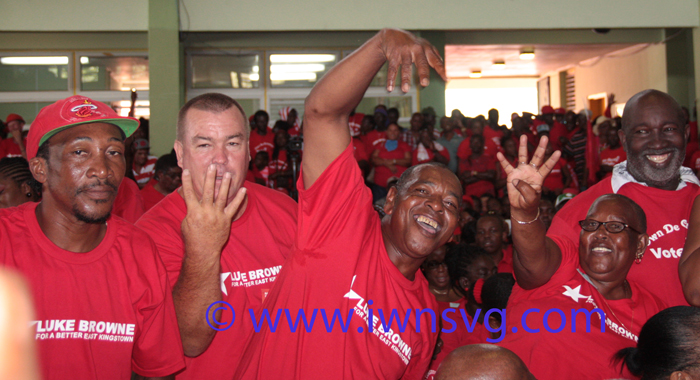 The Unity Labour Party is bidding for a fourth consecutive term in office. (Photo: Zavique Morris/IWN)

Amidst a declining number of popular votes in each successive election, the Unity Labour Party (ULP) on Sunday kicked off its bid for a fourth consecutive term in office by trying to re-create the mood nationally on which it rode into office in a landslide in 2001.

The ULP used the event to confirm the nine candidates who were yet to be endorsed by its Central Executive Committee, thereby settling all 15 candidates for the general elections, which are widely expected this year, ahead of the March 2016 constitutional deadline.

“Make no mistake, the people are poised to deliver an historic victory to us. I feel it, I sense it,” political leader of the ULP, Prime Minister Ralph Gonsalves told the packed hall at the Campden Park Secondary School.

“I am not overstating the case when I tell you that the mood is even better than 2001,” he said in the one hour and 42-minute address that came after a session in which each candidate addressed the delegates.

The ULP came to office in March 2001 after 17 years of governance by the New Democratic Party (NDP), which is expected to be the ULP’s main challenger. Pundits have dismissed as insignificant the challenge the Green Party and the Democratic Republican Party are expected to make.

“It is within our grasp to win every single seat on the mainland and to take the Southern Grenadines,” Gonsalves said.

The Southern and Northern Grenadines have remained NDP strongholds, and stayed faithful to the party in 2001 and 2005, when the ULP won 12 of the 15 seats. NDP president, Leader of the Opposition Arnhim Eustace, who has been representing East Kingstown since 2001, was the only NDP politician in St. Vincent to retain his seat.

The NDP increased its winning in 2010, coming within one seat of government, when the results were seven seats to the ULP’s eight.

Gonsalves also said the ULP will provide “an enormous challenge” in the Northern Grenadines, and, deepening on the role which Sir James plays”, the NDP is in real trouble, he said, invoking the name of his one-time political nemesis, former prime minister and NDP founder, Sir James Mitchell, who has fallen out publicly with the party.

Gonsalves said that the NDP is “in a condition of utter desperation” and claimed that the electorate will frustrate the attempts of Eustace to become Prime Minister without the assistance of Sir James.

He said the behaviour of the NDP suggests “a love for power”, while the ULP has “the power of love”.

Gonsalves said the ULP has answers, not anger; solutions, not grumbling, achievement, not empty rhetoric; and faith not fear.

“They have an insatiable lust for power, … they do not yet show the power of love,” Gonsalves said at the convention, which, characteristic of the ULP, was interspersed with DJ music and live entertainment.

“The ULP is focused on progress, not backwardness. The ULP has changed St. Vincent and the Grenadines for the better, and it has helped the people to change their own circumstances and improve their lives for the better. It is only a man or a woman who is blind, whether by visitation of God or by malice, who can’t see, whether day or night, that things have improved for this country and the people, dramatically.”

But amidst the upbeat mood at the convention, Gonsalves acknowledged that some sections of the electorate are calling for a change in governance.

“Comrades, we represent the change. The NDP says time for a change. As Jomo [Thomas, candidate for South Leeward,] rightly puts it, change from what and change to what? Change from that which is on the upswing improving in the country? Change from a party with a vision and a philosophy about our possibilities and design practical programmes and policies to effect those changes to improve our lives? Change from that to the NDP, which has no policies or no plans?” Gonsalves said.

“They want you to buy a pig in a bag. Eustace wants you to put him in charge of the ship called St. Vincent and the Grenadines, and when you ask him where it’s taking you, he says he’s under sealed orders…” said Gonsalves, who presented a ULP fourth term as an opportunity to continue and consolidate the party’s programmes in a number of sectors, including in education, health, housing, agriculture, and infrastructural development.

“We have been renewing ourselves in policies and in personnel. You look in this party, look at the number of new candidates we have. But they are not candidates which we just pick up. This is not a pick up side. This is a test team of the highest quality ready for test cricket. We batting from one to fifteen and anybody could bowl, and anybody could wicket keep,” he said.

But persons who had turned out to the convention expecting to hear the announcement of the election date left disappointed.

The party had in its radio promotion of the convention said there might have been a special announcement at the convention. At the ULP’s celebration of its 14th anniversary in office on March 28, Gonsalves said he had already decided on the date for the general elections.

“The good Lord is speaking to me on it, and he has led me to the date for the dissolution of Parliament and for the election. But, as in all matters, I have to continue to pray. And, like Eli and Samuel, … when Eli told Samuel said the good Lord wasn’t responding, he advised him, speak, Lord, your servant Ralph is listening,” Gonsalves said as a delegate rang a hand-held bell.