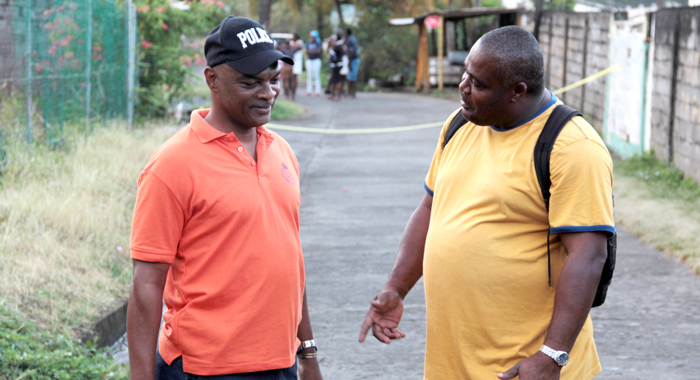 ASP Sydney James, left, and Inspector Trevor Bailey investigate a murder on Friday. They have both been transferred. (IWN photo)

Commissioner of Police Michael Charles has denied that the transfer of two senior police officers to outstations, effective today, is connected to the March 2 arrest of teacher Jozette Bibby-Bowen in the staff room of Bishop’s College Kingstown.

It is not clear if Bailey, a detective, has been instructed to set up a CID unit in Biabou, since there is no CID unit there.

Some observers say that the move is a face-saving measure intended to punish the senior officers for the actions of their juniors, who conducted the investigation.

“People will always have their views, but the Commissioner can transfer anybody where he sees fit,” Charles, however, told I-Witness News on Monday.

“They were transferred; it has nothing to do with any investigation,” the police chief said.

Bibby-Bowen was slapped with two indecent publication charges in connection with posts she allegedly made on Facebook.

Director of Public Prosecution Colin Williams has since discontinued the charges, and Prime Minister Ralph Gonsalves, who is also Minister of National Security and Legal Affairs, has suggested that the actions of the police to charge Bibby-Bowen were not consistent with the directives of the DPP.

The CID will now be headed by Superintendent of Police Ruth Jacobs, while Station Sergeant Hesran Ballantyne, has been transferred from head of CID at Calliaqua to head MCU.

Well-placed sources tell I-Witness News that it seems that James and Bailey are being made fall guys in the aftermath of the embarrassing episode, which has also seen Bibby-Bowen transferred to the Adult and Continuing Education Unit.

The investigation was reportedly conducted by a female sergeant of police who has risen quickly through the ranks since joining the Force less than five years ago to become second in command of the MCU.

The sergeant was in charge on the day of the investigation.

“A sergeant of police whose hand has to be held when conducting an investigation into a bad word case that carries a penalty of nine months in prison has no business being second in command at MCU,” one source told I-Witness News.

Another source said that on the day of Bibby-Bowen’s arrest, Bailey was out of office training a cohort of police officers and by the time he returned Bibby-Bowen was already charged.

The source, which is familiar with the workings of the Police Force, questioned why the Bibby-Bowen investigation was sent to MCU, a unit that is associated with the investigation of homicides and crimes of a similar magnitude.

Commissioner of Police Michael Charles has said that the MCU, as a unit of the police force, is equipped to conduct the investigation.

“These transfers are meant to humiliate and embarrass the senior officers,” the source said.

Bibby-Bowen told I-Witness News on Monday that she never saw or interacted with James during her arrest.

She, however, said that when she arrived at the MCU office, Bailey was leaving and instructed the sergeant to grant her a phone call to contact a lawyer.

Bibby-Bowen further told I-Witness News that she saw Bailey later that night after she had received bail.