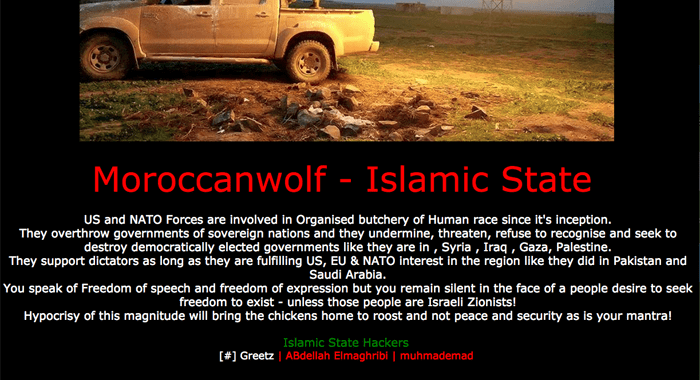 A screen capture of another part of the message appearing on the SVG Government’s website Sunday evening.

The email system of the government of St. Vincent and the Grenadines was not compromised when the website was hacked on Sunday, Prime Minister Dr. Ralph Gonsalves has said.

“Naturally, if there’s any hacking, I would be concerned about if our email system has been compromised and I was told no in relation to all those,” he told a press conference on Tuesday.

Gonsalves said he is more concerned about the timely completion of physical infrastructure under construction across the country than the development surrounding the website.

A message on the landing page of the website Sunday evening suggested that it had been hacked by Islamic State, an Islamist rebel group claiming religious, political and military authority over all Muslims worldwide.

The message posted on the website referred to the United States and NATO, saying they are involved in “Organised butchery of Human race since it’s (sic) inception.

“They overthrow governments of sovereign nations and they undermine, threaten, refuse to recognise and seek to destroy democratically elected governments like they are in , Syria , Iraq , Gaza, Palestine,” the message said.

Gonsalves told the media that his government had informed its diplomatic allies of the development, including the U.S. State Department, particularly because the hacking had “some anti-US commentary”.

“But they (U.S. Government) would have known that it is a hack, but still, nevertheless, we have our duty…” he said.

“It (the hacking) hasn’t, I have been advised, compromised us. I have been assured that all our emails and everything is intact and so forth. And, yesterday, the Ministry of Technology officials brought me up to date about it,” Gonsalves said.

He said government employed professionals were working on the development and were being assisted by professionals from telecommunications providers locally.

“And that’s where that is,” Gonsalves said, adding, “When whatever information further than is known, which everybody is seized of, because it is there, the Ministry of Technology will make a statement…

“… It’s an inconvenience. You have to close it (the website) down for the time being, but I have been assured that no emails, no communications within the government, none has been comprised and then I address my mind to state-to-state relations…

“To tell you the truth, if you ask me which I am most concerned about, whether it is that or completing the bridge at Hope on time, I will tell you complete the bridge on time,” he said of imminent conclusion of the bridge that was destroyed in the December 2013 trough system.