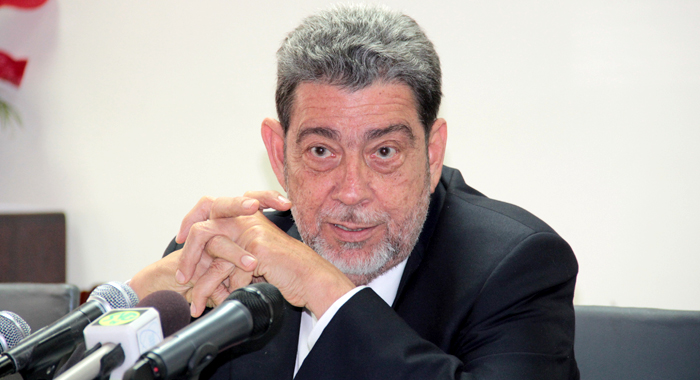 Prime Minister of Barbados Freundel Stuart has apologised to his Vincentian counterpart, Ralph Gonsalves, “for any discomfiture” he might have suffered when a security guard attempted to screen Gonsalves at Grantley Adams International Airport on April 14.

Prime Minister of Barbados Freundel Stuart has apologised to his Vincentian counterpart, Ralph Gonsalves, “for any discomfiture” he might have suffered when a security guard attempted to screen Gonsalves at Grantley Adams International Airport on April 14.

The incident occurred while Gonsalves was in transit in Barbados en route to St. Vincent from Guyana.

Gonsalves had entered the passenger lounge alone as no protocol officers from the Ministry of Foreign Affairs in Bridgetown was on hand to greet him as his flight landed a few minutes earlier than scheduled.

“I told him there was really no reason for it,’ Gonsalves said of the apology from Stuart.

He told a press conference on Tuesday that Stuart had said the incident was ironic as Gonsalves had on the outbound leg of the trip told Stuart that the protocol and security officers at the VIP lounge of the airport are “arguably the best that I meet anywhere in the world”.

“He said, ‘It‘s ironic that there was this incident when you had showered such praises’,” Gonsalves said.

“I said, ‘Yes, and those praises still remain’, because the persons who interacted with me on that Tuesday, the 14th [of April] were neither the protocol nor the security of the state of Barbados. That is, the Government of Barbados. They came subsequently. And, to tell you the truth, I didn’t take it as any big thing,” Gonsalves said.

Gonsalves said he came off the plane “casually”, not wearing a jacket.

He said his Cabinet colleagues later joked that it is probably because he was “so causal” and has lost so much weight that the security at the airport could not recognise him.

Gonsalves said he was travelling alone, as he often does when taking trips across the region.

He, also noted, that contrary to media reports, the flight landed earlier rather than later than scheduled.

“But the important point, the protocol officers were not there. And sometimes that happens, because, I suspect, their co-ordination with LIAT.”

Gonsalves said that when he did not see the protocol officer, he proceeded to the passenger seating area of Gate 9 rather than go to the VIP lounge, as he only had one hour between connections.

He said there were two women on duty at the screening station.

“If any of them had recognised me, they would have said to me, as they have done before, ‘Prime Minister, just ‘ — I’d walk around the actual security screening, because they know that … the protocol for screening is not applied to the head of state or head of government.”

Gonsalves said that when none of the ladies indicated an exemption to him, he placed his bag to be screened and he went through the metal detector, which beeped.

He said one of the women told him, “Sir, it beeped.”

“I said, ‘Yes. It’s my shoe. There is something on it,” said Gonsalves who has in the past said he has an implant in the sole of one his shoes because one of his legs is slightly longer than the other.

“She says, ‘Well you have to go through and take off your shoe.’

“I said, no, that protocol does not apply to me. I am the Prime Minister of St. Vincent and the Grenadines,” Gonsalves said, adding that reports suggesting that he was arrogant in his response are “clearly a contrivance by somebody”.

“I always like to be fair to persons. Around that area, you have a noise, a din, and I spoke softly, not aggressively or anything to the lady. So I give her the benefit of the doubt and I went and get my coffee.”

Gonsalves said that when he was about to pay for the drink, an officer from a private security firm, told the vendor not to accept the money, as Gonsalves had not been screened.

“So I smiled, sipped my coffee, and told him, ‘Don’t create a diplomatic incident. I am the Prime Minister of St. Vincent and the Grenadines.”
Gonsalves said that the male security officer did not touch him or say anything else but began to use his telecoms equipment.

The Prime Minister said he then went and sat down and the protocol and other officials from the government of Barbados arrived shortly after.

“There was no altercation; I behaved quite cool and calm and that is the end of that story.

I didn’t think then and I don’t think now that it was significant…,” Gonsalves said.

“I want to emphasise again, it wasn’t a significant matter. I don’t feel in any way put out. I was I no way embarrassed; nothing of any of those feelings. I just took it in my strides as a mature traveller going about my business, wanting to get home; simple, straightforward,” he said.