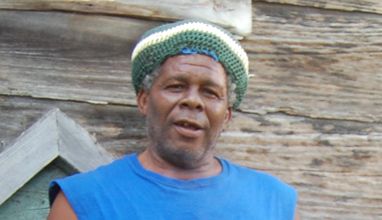 The death of a mentally ill man at the Central Police Station in Kingstown on the weekend has been classified as a case of “sudden death”.

An autopsy concluded that Wendell Ashton, 58 of Chateaubelair, died as a result of a blood clot.

“The medical term is thrombosis. He had a blood clot,” Commissioner of Police Michael Charles told I-Witness News on Wednesday, citing the autopsy report.

Ashton, also known as “Compay Goat” and “Tiga”, was a known mental health patient in the North Leeward town but had also lived in other parts of the country, including the Grenadines.

He was taken into police custody in Chateaubelair on Thursday.

Charles said that generally, when Ashton, suffers a relapse, he would behave in a way, which, though not violence or aggressive, was an annoyance to residents.

“He was Chateaubelair and he was acting up… The people in Chateaubelair said he harasses people. A person passes, he would pull their hand and so on — very annoying,” Charles said.

The police chief said that generally, when summoned the police would take Ashton directly to the Mental Health Centre in Glen.

But that facility is being repaired and mental health patients are being housed in Orange Hill.

Charles said that Asthon was transported to the Central Police station and was in a holding area along with three other mental health patients awaiting transportation to Orange Hill, in northeastern St. Vincent.

The patients were to be taken to the Biabou Police Station, from where they were to t be picked up by a vehicle from the Georgetown Police Station for final transportation to Orange Hill.

Charles told I-Witness News that Ashton and the other patients were well when police made their initial checks Saturday morning.

However, when they returned to transport the patients, Ashton was motionless.

“So they (police) summoned the doctor,” Charles said, adding that the police on duty told him that Ashton had not complained of feeling unwell.

Asthon brings to nine the number of mental health patients who have died while in the custody of the state over the past seven months.

Seven of the patients died at the Milton Cato Memorial Hospital in Kingstown, where they had been admitted after being transferred from the temporary mental health centre in Orange Hill.

Chief Medical Officer Simone Keizer-Beache told I-Witness News on Wednesday that she was studying a report on the death of the patients.

Keizer-Beache said that there was a range of causes of death.

She, however, said that none of the patients died of causes that should trigger further investigation by law enforcement agencies.

The St. Vincent and the Grenadines Human Right Association had expressed “great concern” about the death of the patients.

“It is a matter of great concern and we hope that there will be a transparent and thorough investigation into the deaths of so many residents at one institution,” SVGHRA president Nicole Sylvester said in a press statement in April.

Keizer-Beache said there are many persons who are at the Mental Health Centre who should not be there anymore as they are not acutely mentally ill.

“But the support from the community and from families is not there and it is something we have to work on,” she told I-Witness News.

One reply on “Mentally ill man dies in police custody”