Church of the Nazarene donates to families of Rock Gutter victims 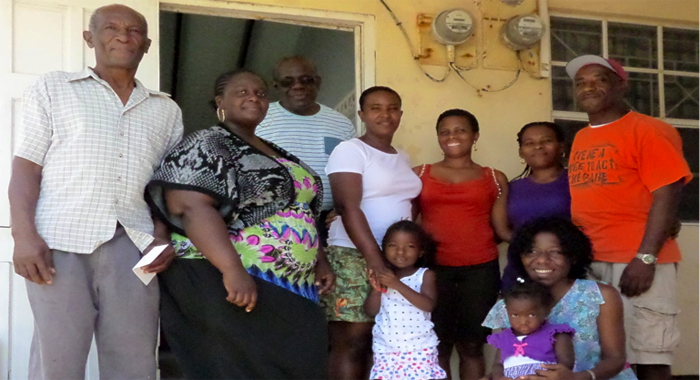 Rev. Chiefton Charles, third left, and Brother Vincent Benjamin, furthest right, of the Church of the Nazarene and recipients of the donation.

The First Community Church of the Nazarene at 2101 Saw Mill River Road in White Plains, New York, under the leadership of pastor Dr. Leroy Richards, has made a monetary donation to families of the seven students who died at Rock Gutter in January.

Through Nazarene Missions International, members of the church, including Vincentians Ulric and Susan Hamlet, raise US$700 to assist the families.

Charles donated a further US$200 for a total of EC$2400, which was distributed equally among the six families who lost their children in the disaster.

Nazarene Missions International exists to mobilize the church in missions through prayer, education, giving, and interactive experiences. They stand ready to respond in times of need.

The funds were handed over on Saturday by Rev. Charles and Brother Vincent Benjamin, District NMI President (Windward Islands District) of the Church of the Nazarene.

The recipients expressed gratitude to the Church of the Nazarene for the financial support.

They plan to use the funds to help finance a memorial event planned for June/July 2015.

The New York group will partner with the Enhams Church of the Nazarene to provide further assistance to the surviving students later in the year.

The pastor encouraged the parents with a reading from Revelation 21 and a prayer for continued fortitude as they go through their time of mourning and healing.

Seven students, all residents of Fancy, died when a minibus careened down a hill and plunged into the sea at Rock Gutter on Jan. 12.