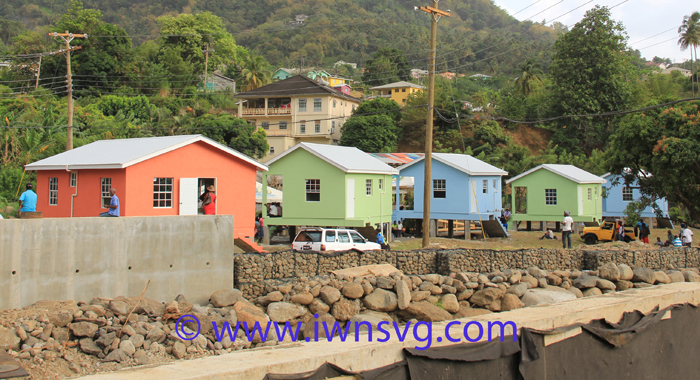 The five houses at Hope, Penniston that were given to disaster victims on Friday. (IWN photo)

The houses, located at Hope, Penniston, will go to six persons/families originally from the Buccament Bay and Penniston communities.

A man will live with his elderly father while the government constructs a house for him.

Work on that house will begin today, Minister of Housing Montgomery Daniel told a ceremony on Friday during which key to the houses were handed over to recipients.

Howie Prince, director of the National Emergency management Organisation (NEMO), told the ceremony that more than 300 persons moved into emergency shelters after the extreme weather on Christmas Eve 2013.

In the aftermath, NEMO had to ensure that the right people receive houses, Prince said.

“Today, we move toward closing a final chapter. Today, we have six persons still living at a shelter at Rillan and in one event today, we will be handing over five houses,” he said.

“We are very happy that we are finally able to close the Rillan Hill centre,” Prince told the gathering.

“In many cases, I can assure you that they are much better than most of these persons had before,” he said.

The houses were built on land near the Hope Bridge on lands where a concrete house, including its foundation, was washed away during the severe weather.

The new houses have been built on stilts.

“The river ain’t move. It’s still there. The flood that we had in 2013 might not be the biggest one that we might have. … Floods and return periods are what they are. Nobody knows that. So these houses were built on stilts in anticipation of the possibility — very rare — these houses were built on stilt so that the water flows under them,” Prince said.

He further told recipients that the Planning Department will not give permission for homeowners to block up under the houses, and any further modifications must be in keeping with the existing design.

And, Daniel told the event that the initial assessment had shown that eight houses needed to be built in the area for disaster victims.

Therefore, three houses were built in another area of Hope and later the five that were handed over on Friday, he said.

He, however, said that further assessment showed that 16 houses had to be rebuilt or located.

“I believe that all of the houses would have been built before today, but … land is not so available and so the Chief Surveyor is presently working to secure more land space so that we can have the rest of the houses being built,” he said.

Daniel said that the flood risk factor was “hammered out intensely” before the decision to build the houses on the land.

He said that Prince had told him in a meeting that he doesn’t think houses can be built there.

“And we sat down and we hammered out all that was required to ensure that these houses, if they have to be built here, that we take all the factors into consideration,” Daniel said.

He said factors informing the decision to build the houses in the area included the construction of a stronger and higher bridge, built to withstand higher velocity of water and reduce the risk of flooding of the area.

Additionally, the stilts will allow for water to flow under the houses, Daniel said.

“And I am sure that these houses are well placed. They are at a beautiful site and they are really protected at this time from any further elements,” Daniel said.

He said that the houses cost EC$367,000 to construct, but the cost of the land has not yet been determined and is being worked out by the office of the Chief Surveyor.

I-Witness New understands that a former occupant of the land had approached a government official after the floods, seeking assistance in obtaining a possessory title.

However, that official is said to have communicated the situation to the central government, resulting in the government acquiring the lands for the construction of the houses.

“That is the standard size of the square footage of houses that would have been built in St. Vincent and the Grenadines. And so, too, the building codes [used] in the building of these houses,” Daniel said.