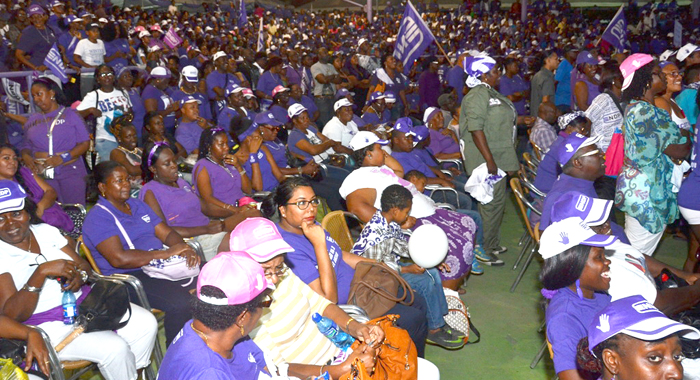 Supporters of the National Democratic Party at their rally on Saturday.

PARAMARIBO, Suriname — Voters in the Dutch-speaking CARICOM nation of Suriname are today electing a new government, the eighth time since the South American nation gained independence in 1975.

Just over 350,000 persons are registered to voters in the election, which is being contested by four coalitions and seven independent parties.

Polling stations opened at 7 a.m. and close at 7 p.m., and partial results are expected as early as 10 p.m. and full preliminary results early Tuesday.

At his party’s last rally Saturday night, incumbent president Desi Bouterse announced that he is running again to become the next president.

In a surprise move, he named Minister of Education Ashwin Adhin, as his running mate.

Like the ten thousand supporters at the event, Adhin was visibly stunned by the announcement, which suggested that Bouterse didn’t discuss the matter with him before he made the announcement.

“Even if you don’t want to, you will become the next Vice President,” Bouterse said, calling the minister, who is also a candidate for his National Democratic Party (NDP) to the podium.

While he has been attacked relentlessly by opponents, Bouterse remains popular, largely due to his social policies.

Under his stewardship, Parliament in 2014 sanctioned a Minimum Wage Act for the first time, while Basic Health Insurance and a General Pension Scheme were also introduced.

The government also cancelled school tuition fees for elementary education, while medical insurance for citizens between zero and 16 years and senior citizens 60 years and older is paid by the government.

The campaigns over the past several months were marred by personal attacks on candidates, resulting in several defamation lawsuits. Bouterse took former minister of Justice and Police Chandrikapersad Santokhi to court after Santokhi claimed that Bouterse introduced the drug mafia in Suriname during his dictatorship in the 80s.

During the campaigns Bouterse’s administration came under fierce attack from the opposition for alleged wide-scale corruption, bad governance and wasting taxpayers’ money.

After losing the general elections in 2000 Bouterse’s, NDP in 2010 formed a government by forging a coalition with several smaller parties.

However, this coalition fell apart leaving only NDP and ABOP in government, which ultimately resulted into a longstanding impasse in parliament where, for months, the National Assembly couldn’t function since there was a lack of quorum.

In a bid to avoid blackmail tactics from coalition partners that paralysed the decision-making of his government and buoyed by strong standings in opinion polls, Bouterse decided that the NDP would take part independently in today’s general elections.

He needs to secure 26 of the 51-seats in parliament and at least a two-thirds majority of 34 seats, to be re-elected by the National Assembly.

If parliament fails to elect the president, the Head of State will be elected in the People’s Assembly by a simple majority.