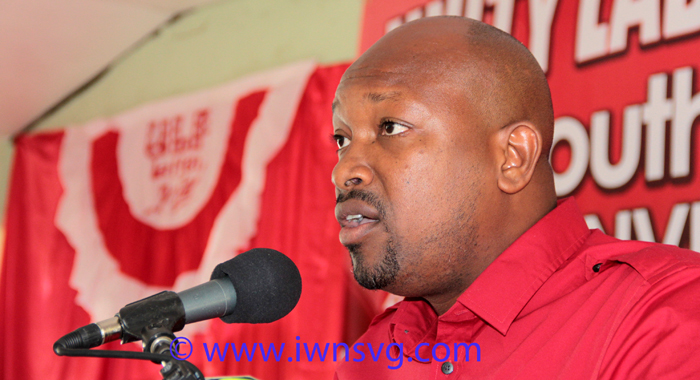 Young supporters of the ruling Unity Labour Party (ULP) have been told that it will take more than the refrains of popular songs to secure victory at the next general elections.

The ULP is seeking a fourth consecutive term in office in general elections that Prime Minister Ralph Gonsalves says will come this year, ahead of the March 2016 deadline.

“The role of the youth in this campaign is critical,” Minister of Agriculture Saboto Caesar, the youngest elected Member of Parliament, told the ULP Youth Arm Convention on Sunday.

“We are hearing the song, ‘The whole place shell down when we touch down … But a lot of work has to be done by you and by me before we make the victorious touchdown on Election Day,” said Caesar as he delivered the feature address.

“And that is why I love what is being said by East St. George, that we want all hands on deck. We want all the seats. The harvest is certainly plenteous and the young Labourite are ready for the fight,” said Caesar, who is seeking a second consecutive term as MP for South Central Windward.

He said that young Labourites must first understand the message.

“We must understand where we are coming from, the path taken to bring us safe thus far and the policies and programmes of the future,” he said.

He said the youth must package the party’s message properly.

“You have been doing an excellent job thus far. … But I want us also to do our house-to-house campaign, to know every single door in this country in defence of unity labour Party, the party for the young people in this country now and forever.

He said the young Labourites must go through their communities door-to-door, ensuring that every young person is registered to vote and obtains their ID cards.

“That is how we are going to ensure that we shell down on election night,” he said.

“Today, I encourage the youth to stand up and to stand out. Stand for your party, stand up for your country and be counted.

“I encourage us to go the extra mile for our party. You have a great party to defend.

“Your endurance is going to be critical. It may be a sprint, but it can also be a marathon,” he said in reference to the period between the announcement of the election date and the actual polls.

“So, today, as the battle cry is sounded. Let us go forward in unity. Love and respect is present in this party. And we, as young people, we show the respect to Sir Vincent and to Sir Louis, not the kind of disdain which the threat their founding father with on the other side.”

Caesar called on the youths not to exhibit hate on the campaign train, saying, “in normal circumstances, it is only when you show love that you will be able to win hearts and minds”.

He said he was pleased with the turnout at the convention and said the young people must pledge not to disband after the election.

“… I want to see this very energy present in this hall, when we win the next general election, that very energy must continue to build this blessed nation of ours.