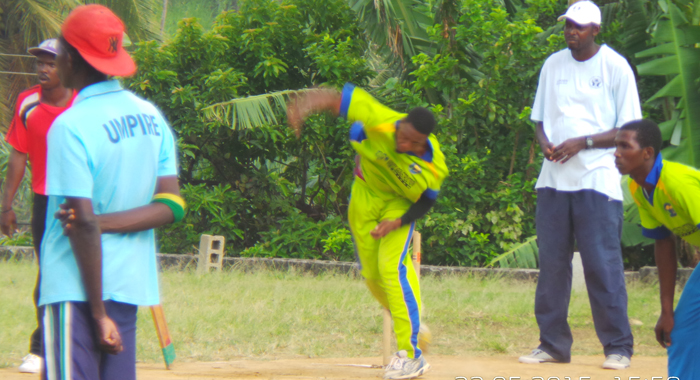 On Saturday, Gairy Construction Simple Boyz took on an out of sorts Smashers and beat them by 7 wickets.

Batting first, Smashers never looked motivated and meandered along as they struggled to get above 4 runs an over for the entire innings. The competent Kazim Haywood failed to find any momentum and batted all of 13 overs for his 11 runs.

Smashers found themselves 28/2 in the 11th over but imploded and lost their last 4 wickets for the addition of 1 run to be all out for 45 in 18 overs.

Edwin Payne who took 3 wickets in 4 balls finished with 3/7 and Eldon Morris took 3/11.

Gairy Construction Simple Boyz got to their target in 7.3 overs, closing out the match on 50/3 with Stein Joseph striking 3 sixes — the last one ending the match-being unbeaten on 20.

On Sunday, Nice Radio Clinchers received some stiff opposition from Computec Cane End before prevailing by 16 runs, with management and players looking nervous and anxious at the end.

Batting first, Nice Radio Clinchers got to 101/5 in their allotment of 20 overs with O‘keif Andrews hitting 3 sixes and 1 four in his top score of 28 and Desron Spring having a similar boundary tally in his 26.

Computec Cane End, who appeared not to have the necessary self-belief, sauntered along hoping to put up a good showing as against seriously challenging the target.

But things got a little tense when Dwight Allen (25), the only batsman who looked to have had the fight for the chase, was at the wicket. He struck two sixes and two fours before being run out. His dismissal brought sighs of relief that could be heard from some distance from manager Pearlina Thomas and the Clinchers Team members.

Computec Cane End then added a few more runs and needed 30 off the last 3 but with 2 wickets in hand. An excellent over by Andrews and the follow up one by Lavia leaked only 9 runs for the loss of an additional wicket. And with 21 needed off the last over batsman Hance Francis (12) pulled a short ball straight to the man on the midwicket boundary to close the innings on 85 in 19.2 overs.

His dismissal was greeted by broad grins from the winners.

In the day’s other match, Sion Hill Tallawahs got the better of their neighbours, Owia Young Strikers by 5 wickets.

The match brought some of the most talented cricketers from over the Rabbacca River to showcase their ability in the central part of the country. They did this in front of spectators, many of whom were chewing on some wax apples which they were able to pick without stoning.

Sent into bat, Owia Young Strikers were unable to conquer the disciplined bowling of the Tallawahs and restricted to 98/8 in their 20 overs.

Rohan Lavia top scored with 22 with 3 sixes, while Rolando Right (15) and Zimroy Baptiste (12) showed some fight towards the end.

Shamic Roberts took 3/7 to once again lead his team’s bowling, with Collin Williams 2/9 and Kerwin Williams who came in for some late stick 2/37.

Denson Hoyte went for 45 in picking up two wickets in his four overs.