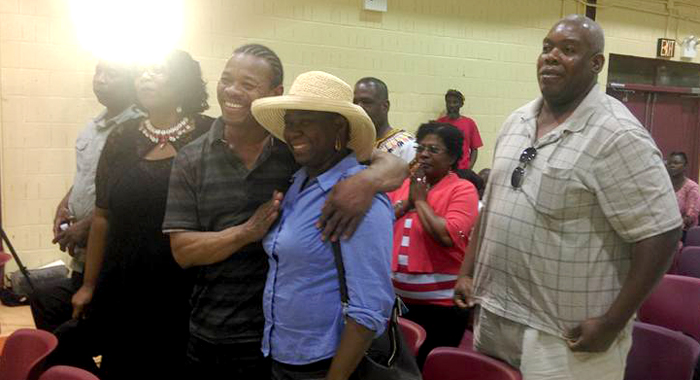 Members of the Garifuna nation at the NDP’s town hall meeting in New York on Sunday. (Photo: Michael Johnson/Facebook)

NEW YORK — Leader of the Opposition in St. Vincent and the Grenadines (SVG) Arnhim Eustace says that if elected to office in the next general elections, the New Democratic Party (NDP) will grant honorary citizenships to the Garifuna, descendants of indigenous Vincentians who consider SVG their ancestral home.

“I expect the New Democratic Party to win the next general elections. And I declare here tonight, that having won, I will take the first step by making all the Garifuna honorary citizens of St. Vincent and the Grenadines,” Eustace said to extended applause at a town hall meeting in New York Sunday night.

“This I have given much thought to, and that is just the first step,” he said. “Over time, in consultation with our brothers and sisters, we can refine our programme to bring them ever closer to St. Vincent and the Grenadines.”

General elections are constitutionally due in March 2016, but Prime Minister Ralph Gonsalves has said that they will be called this year.

The NDP is expected to present the main challenge to the Gonsalves-led Unity Labour Party administration, which is seeking a fourth consecutive term in office.

Eustace acknowledged that some persons will criticise the policy. “… I expect because we’ve have indicated that we are discussing this issue, there are those naysayers who say it can’t be done and it won’t be done. But it will be done!” he said.

“I heard an individual who heard us talking about Garifuna and his attitude was this, ‘If we do anything for them, they will become a drain on our economy.’

“There is an old saying, where ignorance is bliss, it’s folly to be wise,” said Eustace, who along with MP for North Leeward Roland “Patel” Matthews and former minister of works Glenford Stewart travelled to New York to drum up support for the NDP among Vincentians in New York ahead of the elections.

“I will say this: while we reach out to the Garifuna today, it could turn out that they make the most marvellous contribution to the development of the St. Vincent and the Grenadines economy,” he said.

After the death of their leader, Joseph Chatoyer, on March 14, 1795, the Garifuna were exiled to Balliceaux, a tiny Grenadine island, where thousands died before they were sent to Roatán, an island off Honduras, before spreading to Central America, and, later, the United States.

Eustace noted that the Garifuna nation is much larger than the population of SVG, which has approximately, 106,000 residents.

He noted the concerns about the negative implication of warming US-Cuba relations on tourism in the rest of the Caribbean.

“… but the Garifuna can be tourists too — seven hundred thousands of them. And where they will come first? St. Vincent and the Grenadines,” Eustace said.

“We have to come to the state where we look at the Garifuna in that light, also as persons doing business in St. Vincent and the Grenadines with assistance from us, which will help our economy to grow,” said Eustace, an economist.

“And, at the same time, goods that are produced in St. Vincent and the Grenadines and are delivered elsewhere, they may buy also if we set up businesses that export to them. All these are in the realm of possibility.”

He described as “based on idiocy” statements suggesting that the Garifuna will be a drain on SVG.

“So, tonight I say to the Garifuna, welcome home. We have stated our position tonight, and we will stand by it,” Eustace said.