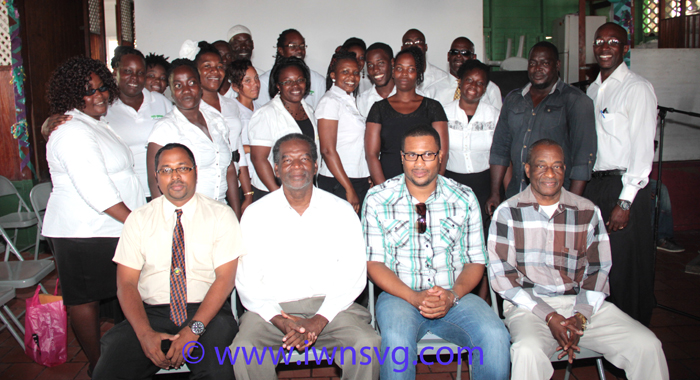 The graduate of the training programme along with, from left, Stanton Gomes, Bernard Joseph, Hayden Billingy, and Maxian Harry. (IWN photo)

Twenty-one persons on Union Island have been trained in radio broadcasting with a view to using their skills to address issues related to climate change.

They were trained under a Radio Grenadines Inc. (www.radiogrenadines.com) project aimed at raising awareness on climate change and environmental issues.

The graduates received their certificates on Friday at an event at which Radio Grenadines, an Internet radio station, was officially launched.

The 21 persons are part of a wider group of 62 from 44 organisations in the Grenadines who have received training focused on communications and climate change.

The training received sponsorship from the Global Environment Facility (GEF) Small Grants Programme, whose National Coordinator, Hayden Billingy, said the organisation was very proud to be associated with the Radio Grenadines project.

“This project looks at using electronic media to raise awareness about the important issue of climate change that is affecting us not only locally but globally.

“In a decade where the environment is not as sexy as other competing interest, the GEF small grants programme and the United Nations Development Programme emerge as outstanding protagonists for environmental protection,” he said.

Billingy said that in spite of the harsh economic climate, there are still local NGOs that care enough about the environment to dedicate tremendous voluntary work to ensure that it is protected for future generations.

He commended Radio Grenadines and other NGO’s that have taken up “such an honourable challenge.

“It shows that some people still appreciate and understand the indelible, fragile connection between the environment and human health and also livelihoods,” Billingy said.

“Because of this investment, Radio Grenadines is better able and better equipped to broadcast environmental programme as well as other social events,” Billingy said, noting the number of persons trained in radio broadcasting and production, public relations, and media use.

“If you are going to be in radio, you must read and you must be in contact with your community,” said Harry, a seasoned broadcaster.

He said there were plans to make Radio Grenadines a full-fledged FM radio station with Internet capabilities.

“Radio Grenadines, I am convinced that they have the foundation, the skill, the knowledge that they can build on to function in any radio in any part of the world,” Joseph said, and reminded the graduate of his challenge that they strive to be the best.

“But what we had going for us was the technology,” he said, adding that the technology that Radio Grenadines has is comparable to or better than the other mainstream radio stations in the country.

He said the station is listened to a lot by Unionites overseas, who use it to stay abreast of what is taking place on the island and in other parts of the Grenadines.

The station, a not-for-profit undertaking, was incorporated in 2012 and also has contributors in Canouan, Bequia, and Canada.

“Today, we have 21 more persons joining the team, which I am happy for, because all of the work was on me and me alone,” Gomes said, noting that capacity building was an element of the project.

“We decided to embark on this project, making it different, putting the power in the hands of the people,” Gomes said, as he recounted how the station has moved from two bedrooms to be able to do live broadcast of sports and other cultural events.

“Having a facility to engage persons in interviews and all of that could only be a dream for a non-profit organisation with limited capacity to raise fund, but with GEF, they really made our dreams come true,” Gomes said.

And, MP for the Northern Grenadines, Terrance Ollivierre noted the positive impact that the station has had on communication in the Grenadines.

“Because of Radio Grenadines, we are aware of what is happening. We now have the opportunity to educate our people so that we can ensure our environment can last for those who will be around us for a long time,” Ollivierre, adding that he is proud of what the group has been able to achieve.

“We have a golden opportunity to make sure that there are certain areas — tourism, sports, culture –that we can spread Union Island to the wider world,” he said.

“And, Executive Editor of I-Witness News, Kenton Chance, commended radio Grenadines and encourage the group to continue to follow their dreams.

Chance shared his experience of how I-Witness News, a blog he started in Taiwan in 2009, has become St. Vincent and the Grenadines’ most widely read news and current affairs website.

“It is very commendable that training has been organised for you because we live in an environment here in St. Vincent and the Grenadines, where everybody, especially if they are sitting behind a microphone or you put a pen in their hands and they can write some words, tell themselves that they are professionals. But I am sure that you will realise that the more trained you become, the more you know, the more you realise how little you actually know,” Chance said.