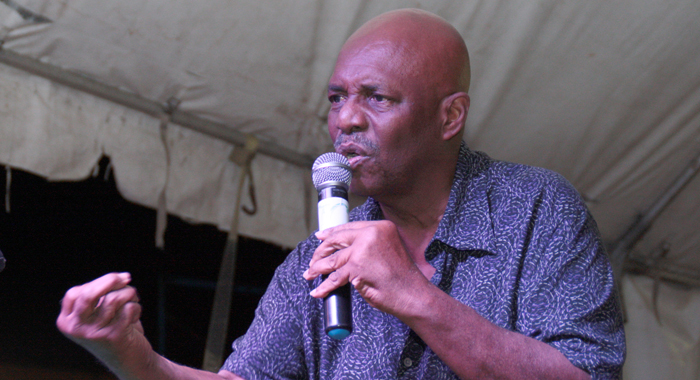 Garifunas will not come to St. Vincent and the Grenadines to take away citizens’ jobs and property, contrary to a comment by Prime Minister Ralph Gonsalves, but they can generate million of dollars in tourism revenue annually, Leader of the Opposition Arnhim Eustace says.

Eustace told a New Democratic Party rally on Saturday in Layou, that SVG could receive EC$22 million in revenue annually if a mere 2.5 per cent of the Garifuna population visits the country annually.

He further defended his proposal to grant honorary citizenship to all Garifuna people if the NDP wins the next general election.

The Garifuna, descendants of indigenous Vincentians who were exiled more than 200 years ago, consider St. Vincent and the Grenadines, which they call Yurumein, as their ancestral home.

Eustace said there are about 750,000 Garifuna in the United States and Central America. “And they love this country. I have seen enough evidence of that myself to be aware of that.”

Gonsalves said in early June that he opposes the proposal and suggested that Garifunas will come to SVG to take away Vincentians’ houses and lands.

“Ralph Gonsalves is a deceiver,” Eustace said, adding that Garifunas are not coming to SVG to take property or jobs.

Eustace said, however, that the Garifuna, by visiting, can cause SVG to become a wealthy nation because of the contribution that they can make to benefit the country.

“The hotels will have to employ more people, they have to buy more vegetables, more agricultural products and so on, so the farmers will benefit. They have to pay more taxes, so the government will benefit,” Eustace said.

He added that the much-delayed EC$700 million international airport under construction at Argyle could become more viable if Garifunas visit SVG.

“They will have 18,000 passengers if only two and a half percent of the Garifunas come here, making the airport more viable, better off.

“And here is Ralph Gonsalves, who is always talking airport, he says they are coming here to take jobs. He is a hypocrite. That is nonsense. The Garifuna can benefit this economy greatly. It is for us here, our Tourism Authority to go and do the work and promote St. Vincent and the Grenadines in such a way that more and more people want to come here,” Eustace said.

He, however, said that the government will also have to make a contribution, including developing Balliceaux, the tiny Grenadine island where thousand of Garifunas died during the first stage of the exile.

He said this will mean that there will have to be a small hotel or two in Balliceaux and a landing area for boats.

“We in the New Democratic Party are satisfied that with the Garifuna becoming honorary citizens, that we all will be better off. More people will be working, more income will be earning and all of us will benefit from it. And that is just tourism,” he said, adding that Garifuna businesspeople can also invest in SVG, helping to generate foreign exchange.