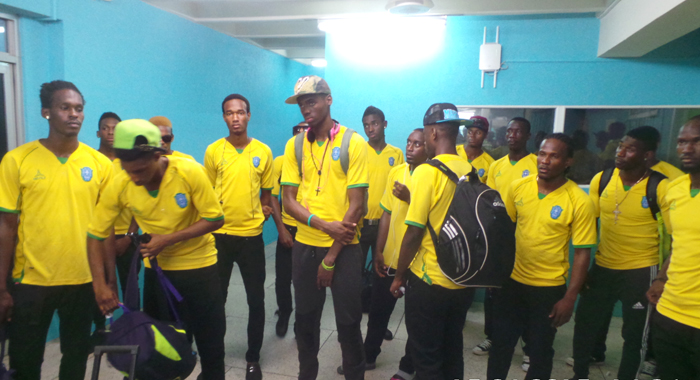 St. Vincent and the Grenadines, senior foot team “Vincy Heat” return to training this week after going past Guyana’s Golden Jaguars and into the next round of the CONCACAF qualifying for the FIFA World Cup Russia 2018 on the away goal rule following a high-octane 4-4 draw at the Guyana National Stadium Sunday night.

Coach Corneilus Huggins said he was not happy that his team conceded four goals, saying  when that many goals are scored on a team, more times than not, they end up losing. And while he was happy that his strikers were on target at the other end, Huggins said that plenty work will go into the defence in preparation for upcoming fixtures.

“We were missing a lot of goal-scoring opportunities before but now we have that covered, we are letting in too many goals and we are going to try and deal with that”.

The two teams went into the match needing a win by any margin to go onto the next stage of the Qualifiers after they had ended 2-2 in St. Vincent in the first leg of the two-way tie.

As in the first match, it was the Vincentians who tested the thermometer with their sheer pace and attacking approach that left the 5,000-strong crowd in nervous awe.

It was once again the mercurial Myron Samuel who pushed Vincy Heat into the lead when he ended another attack by putting the ball into the back of the net just on quarter of an hour.

They held the lead up until five minutes before half-time when the home team drew level through a headed goal from Emery Welshman in the 40th.

But instead of falling into despair, “Vincy Heat” did the opposite and within a minute retook the lead through “The Cool Assassin”, Tevin Slater.

The Guyanese, who always looked a threat coming forward, was able to draw level once more when the skilful Brandon Beresford was brought down in the area. The overseas-based Neil Danns, who missed the first match owing to travel documents mix-up, placed the ball expertly into the goal to make it 2-2.

The situation was now on rewind with both teams having scored the equal amount of goals home and away up to that point. But it was to be “Vincy Heat” who surged ahead in the 58th minute, following another pyroclastic flow into the occupied zone of the Guyana defence that had the Golden Jaguars like a cat on a hot tin roof, as Slater scorched his way through and culminated his run with his second of the night and third in the two matches.

With the crowd expressing their disappointment in various ways, they were forced to stand and applaud, some grudgingly and others genuinely, with the fourth by Vincy Heat, from the talented and quick-thinking Oalex Anderson.

Samuel picked up a ball just outside the area, flicked it up with his heel to Anderson who with his back to the goal unveiled the bicycle kick, which sent the ball into the goal past a stunned goalkeeper. The crowd erupted to a man to hail what was for many, regardless of age, a first-time piece of magic in all its magnificence.

“I cried. I was emotional — don’t know why, but I was just crying after the ball hit the net,” Anderson told the I-Witness News on the team’s return at the E.T. Joshua Airport this week.

He said that it was not the first time he had attempted the kick, but in the past it had either struck the post or gone wide, so it was the first time he was scoring with the shot. And he said doing so in a World Cup match was even more satisfying.

The Vincentians, now leading 4-2, were to concede two further goals as the Jaguars attempted to claw their way back into the match.

In the 77th minute, Welshman took advantage of poor defending to gather the ball and lobbed it over goalkeeper Winslow Mc Dowell into an open goal. And 10 minutes later, Danns rounded off a good night with his second after a well-worked ball by the home team.

With nerves now on edge, the fourth officials showed three minutes added time – 180 seconds for any of the teams to find a fifth goal to go through to the next round. But the teams, which had averaged a goal every 15 minutes over the two legs, found the task of getting one in three minutes as difficult as swimming the Demerara River with one hand tied or climbing La Soufriere backwards.

The final whistle by Jamaican Referee Valdin Legister was greeted by wild celebrations from the Vincy Heat as they celebrated advancing to the next round despite the 4-4 result.

The Guyanese left the ground being second best but of some consolation, though meaningless in the scheme of things, was that they still had not lost to a Caribbean side at home since 2007.

Huggins said even after Guyana equalised in the closing minutes, he was always confident his team would pull through based on the quality of the players and their fitness level.

He also thanked the Vincentians in Guyana, including former minister of health Douglas Slater, who came to the team’s hotel along with others to give them a “pep talk” before the match.

Huggins said Vincy Heat should have won convincingly at home in the first game. Guyana’s Head Coach, Jamaal Shabazz, in summing up the game, highlighted that their defence left much to be desired.