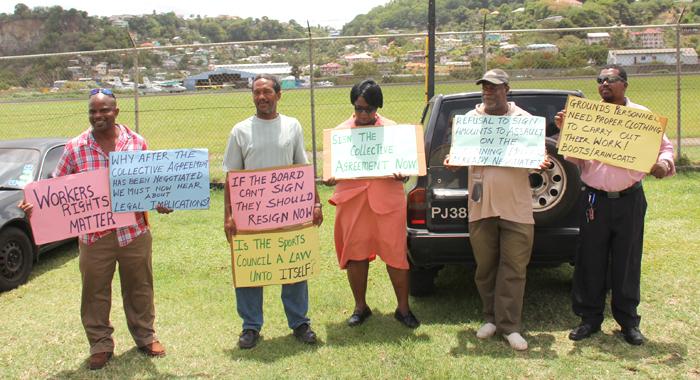 Members of the Public Service Union protest outside the Sports Council Office on Tuesday. (IWN photo)

The National Sports Council late Wednesday reiterated its position that it will await the direction of the Attorney General’s Chambers on the way forward regarding a collective agreement with the Public Service Union.

The government body is maintaining its position one day after the union accused it of being part of “an all out attack on collective bargaining” in St. Vincent and the Grenadines and called for its directors to resign.

President of the PSU, Elroy Boucher, told I-Witness News that the Sports Council has refused to sign a collective agreement that both groups negotiated in 2012.

He said the agreement covers wages, working conditions, occupational safety, health issues, hours of work, medical and vacation leave — “all of the things that will relate to workers and their welfare”.

He said both parties had a meeting earlier this year to sign the accord but chair of the Sports Council Jules Anthony informed the union that the board of directors has to look over the agreement.

“But this is the same agreement they had since 2012. I was more or less amazed that that was said. Since 2012 you had it in your possession. So if you wanted to go over it as a board, you had more than enough time and they did nothing,” Boucher said, adding that the Council is now saying that the agreement has been sent to the Attorney General for review.

“And the question is, if you want to wait ‘til now to send it there, why didn’t you send it while we were negotiating in 2012?

“And then you had 2012, 2013, 2014, why didn’t you do that? And then you wait until we are pressuring you to sign to say you are going to send it there. Even a fool can read between the lines: there is no intention of signing it. It is frustrating the whole effort of the union,” he told I-Witness News.

“It is an attack of the collective bargaining process in the country by this corporation. It is a total disregard for workers rights and benefits.”

“Why wouldn’t any corporation who is responsible enough, particularly of government, not want to sign a collective agreement? And you say you are concerned about workers,” Boucher said.

He acknowledged that there have been changes to the management and board of director of the Sports Council since 2012.

“But there are members of the board who remain there. And I have said to them, if you are going to argue that some of the board members are different, then are you telling me that there is no continuity when people take over organisations, especially government run organisations? So everything should be dropped and we start over from fresh,” Boucher told I-Witness News.

“This is the first step. We will give them some time to comply. If they do not comply, then we will have to call out the workers on the picket line,” he said.

But Anthony told I-Witness News late Wednesday that the agreement was to be in effected from Jan. 1. 2012 to December 2013.

“A great part of it was the lapse in the Public Service Union, because they had their own internal problems. So the agreement as not signed,” he said in an apparent leadership challenge at the PSU that that resulted in legal proceedings.

“… when we had a meeting with the Public Service Union earlier this year, our position was that because so much time had elapsed already, we shouldn’t go and sign that agreement.

“We could look back at what was agreed on, instead of just going and signing the agreement just like that. And that is where the conflict came. The conflict came where we thought that instead of signing an agreement that was already expired, let’s look ahead. They didn’t want that. They wanted us to sign the agreement first and then move on,” Anthony said.

He said the agreement was sent to the Attorney General’s chambers earlier this year, and the council will follow up with her office.

But Boucher said the action of the Sports Council is part of a greater problem of reluctance by state agencies to sign collective agreements.

“BRAGSA has an agreement that we are trying to get them to negotiate, and again, there is the reluctance to do so. The Postal Corporation has one that was negotiated in 2011. They say it is at the Attorney General’s office for all those year.

“If an agreement is there for all those years, one would know that it has already expired. But the nature of agreements is that once it is signed, it is in effect until you negotiate another one. So, for all those years it is at the Attorney General’s office, can nobody tell me is the interest is in signing it?” Boucher said.