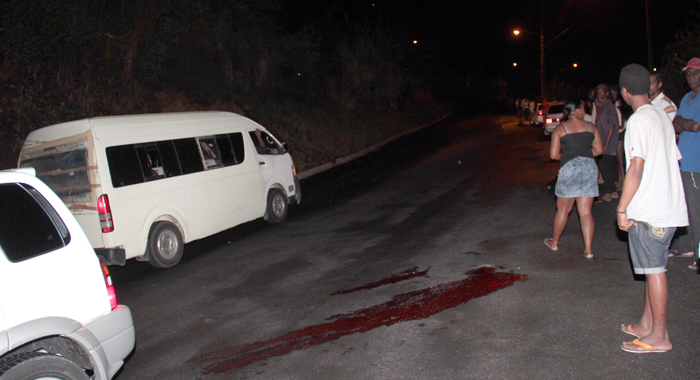 Rillan Hill resident look on as a minivan prepares to take the injured man to hospital Sunday night. (IWN photo)

A man identified as a resident of the Central Leeward town of Layou was shot in Rillan Hill around 9:45 p.m. Sunday in what villagers have described as a “drive-by shooting”.

Villagers say that two men were walking along the main South Leeward Highway between Rillan Hill and Pembroke when a vehicle drove by and an occupant fired three shots at the men then sped away.

One of the men was struck at least once, and the other is said to have fled the scene.

A minivan took the injured man to hospital but his condition was not known at the time of publication.

Villagers say that the injured man seemed to have been shot in the abdomen.

They say that the man may have been shot by the occupants of a vehicle that was parked in the South Leeward village for some time before the shooting.