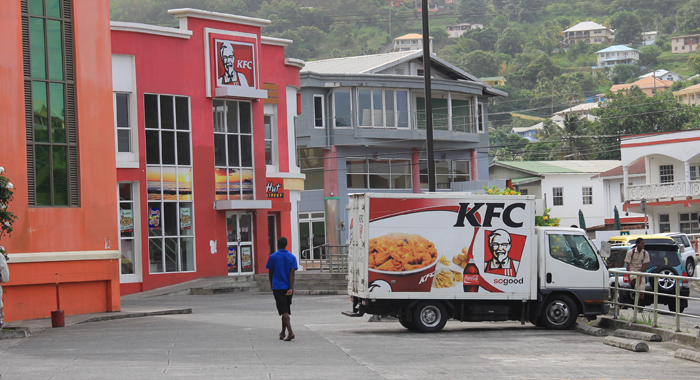 The KFC franchise has been awarded to Tessa and Kelly Glass. (IWN photo)

The new holders of the KFC franchise in St. Vincent and the Grenadines will on Tuesday begin recruiting workers, but the former staff is no closer to knowing when they will receive severance and other benefits due to them.

KFC has been closed since March when it went into receivership.

The franchise was held then by St. Clair Investments Ltd., headed by businessman Ken Boyea.

But Tessa Glass announced in a press release last week that the KFC franchise has been officially awarded by Yum Restaurants Inc. to her and businessman Kelly Glass, founder of Karib Cable.

“The new franchisees are working on building back the brand to its full potential and re-launching in St. Vincent as soon as possible,” Glass said, adding that a lot of work needs to be done to get KFC “up and running as we have very high standards and intend to do it right from the start.

“We ask that the public remain patient while we work to get our beloved KFC restaurants open as quickly as possible,” Glass said.

She said a date has not yet been set for the opening of the KFC restaurants in St. Vincent, but added that they will not be reopened in time for Vincy Mas, which climaxes early July.

“They (franchisees) intend to open each store separately as there is a lot of work that needs to be put in,” the press release said, adding that an open call for all vacancies for KFC has been set for Tuesday at Blue Lagoon Hotel in Ratho Mill and all applicants are welcome to attend.

There were three KFC outlets in St. Vincent and the Grenadines — two in Kingstown, and one in Arnos Vale.

Boyea, when asked if former KFC workers have been paid all benefits due to them, told I-Witness News, “I wouldn’t know that because it has been in receivership, the receiver is responsible for that.

When contacted by I-Witness News about the status of the former workers, Tessa Glass said she could not comment.

I-Witness News wanted to know what implications, if any, are there for the former KFC workers, if any of them will be offered positions when the restaurant reopens or whether they have to reapply like everyone else.

I-Witness News also asked Glass to say if the new franchisees have also acquired the physical assets as well as liabilities of the former franchise owners and where would KFC be located when it reopens.

“… at this point we cannot comment further,” Glass told I-Witness News, adding, “We have an open call for vacancies on Tuesday next week [tomorrow, June 23] where all (old and new) are invited to attend.”

I-Witness News understand that some weeks ago, a lawyer, acting on behalf of 28 former KFC workers, wrote to the liquidators regarding their severance pay.

The liquidators are said to have responded warmly by email but ignored the letter.

One worker told I-Witness News that while she was paid for the days she worked ahead of KFC going into receivership, she is yet to receive another other benefits.

She said receivers have told them that they would be paid after obligations to its creditors are met.