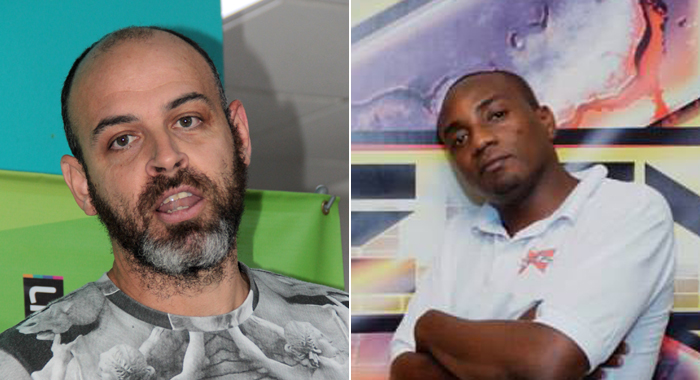 The rivalry between two of the nation’s entertainment-focused radio stations has resulted in some soca artistes having to choose between one of two events this weekend, rather than the option of performing at both.

The situation arises as the P’tani Carnival Committee, with support from Xtreme FM, has restarted its “Cheaper Wata” wet fete, slated for this Saturday, the same night that Hot 97 FM will host its H2O Soca, another fete.

Patrons will only have to come up with EC$20 to enjoy Cheaper Wata, tickets to H2O, which gets progressively more expensive as the date of the event draws near, are expected to soar to as much as EC$75.

While Luke Boyea of Hot 97 FM has dismissed Cheaper Wata as a “glorified block-o” taking place in a “banana shed”, he has told artistes that if they perform at the event, which takes place at the La Croix Palletisation Plant, he will not retain them for H2O, which will be held at the Arnos Vale Sports Complex.

One artiste told I-Witness News that Boyea called him and gave him an ultimatum about his performances.

“His reason was that that fete was orchestrated to deliberately hurt his event,” the artiste said of Boyea’s response to Cheaper Wata, a stance that the businessman confirmed to I-Witness News separately on Thursday.

The artiste, who asked not to be named, saying that he feared that Hot 97 would take his songs out of rotation, told I-Witness News that he thinks that Boyea’s position is unfair.

The artiste noted that in St. Vincent and the Grenadines performers have a small eight-week window in which to make money and stipulations like Boyea’s should only be made if an artiste is booked exclusively for an event and paid premium price.

“This is our premier revenue generating season,” the artiste said, noting that performers don’t make a lot of money through the Carnival Development Corporation (CDC) and therefore depend on private promoters to hire them.

He said there is great disparity between what private promoters pay local and foreign artiste.

“If an artiste can maximize his income by performing throughout the season and on the same night, it should be the right of the artiste so to do,” the artiste said.

The soca singer said that some of his colleagues have pulled out of the Cheaper Wata fete out of fear that their music will be blacklisted on Hot 97, the nation’s most popular radio station.

But Davon “Basics” Cato of Xtreme FM dismissed as “rubbish” suggestions that that Cheaper Wata, which started in 2011, was designed to hurt H2O.

He said that he and co-owner of Xtreme, Mark Richardson, have been partnering with the P’Tani carnival organisers for years — before Xtreme came on air six months ago.

“As we have the station now, … we can further support them…” Cato told I-Witness News.

“Cheaper Wata has been coming on for over three years. Xtreme is six months old. How are we doing it to hurt their event? … It is only a problem to Hot FM now because they can no longer squeeze the guys by promoting their fete over Cheaper Wata…” he said, and accused Hot 97 of using the radio station to out-market other private promoters.

Cato said that Xtreme FM’s listenership is growing and admitted that the collaboration with P’tani could further accelerate this.

“But it was never our mission to destroy anybody’s credibility or anything like that…” he told I-Witness News.

He also noted the seasonal nature of the large demand for soca performers. “All we want to do is to give people a chance,” Cato told I-Witness News, adding that Cheaper Wata organisers only asked five artistes to perform at their event.

“You want to do an event, you do your event; nobody stops you. But don’t take what you have, which is the radio that everybody has to come advertise on to pressure them, and everybody must bow to you because you are the almighty? No, that is not fair to people.”

Carlos “Manage” James of the P’Tani carnival group told I-Witness News, also separately on Thursday that carnival events in the Marriaqua Valley provides “economic spill off for the community,” adding that persons were already erecting bars and food stands for Saturday’s show.

He said organisers decided to have a go at it again this year and partnered with Xtreme FM.

He told I-Witness News that he thinks the market is there for everybody and people will go to the show that they can afford.

“…we decided to offer another wet fete for patrons to enjoy themselves and with the economic situation in the country, people’s eyes are open…” James told I-Witness News.

“A wet fete is just water. The atmosphere could be different, depending on how much water you have and the kind of DJs and so on. But at the end of it, a wet fete is a wet fete and half of the people who go to a wet fete don’t go to get wet; they go into the dry zone,” James told I-Witness News, adding, “There is enough market there for both events.”

But Boyea suggested that the conversation on social media about the seemingly intense competition between the two radio station and the shows was being blown out of proportion.

“One is like in a little banana shed and one is on a big stage. They are not really in the same league,” he said.

He, however, told I-Witness News that the organisers of Cheaper Wata might have more than providing cheaper, alternative entertainment in mind.

“Yes, I would say there is a desire maybe in people affiliated with the thing to personally hurt me but I don’ think they have any credibility,” he said, even as he noted that Carnival is a competitive industry with multiple stations and promotions.

“There is not a limitless supply of money so I guess different promoters are targeting the same audiences. In that sense, there is competition. When I say it (Cheaper Wata) is not really credible, you can’t really compare the two events. One is of thousands of people on a big stage with a big lighting programme and sound programme, three different bands and all sorts of artistes. A big production. One is really like a glorified block-o.

Boyea took to Twitter this week and fired off a few shots, seemingly at the organisers of Cheaper Wata, but told I-Witness News the tweets “are not necessarily related to that”.

He also said that reports that he had given artistes an ultimatum were “not strictly true”.

“All I am saying, if I am booking you and you want top dollar from me, then you have to make your choice. You are either on this show or you are on the other one. As an artiste, you have to choose what you want.”

Regarding that point that an artiste can perform at two events in one night, Boyea told I-Witness News: “In the promotion business, promotion is about promoting something attractive. So why would you want to promote something which can be seen or enjoyed elsewhere? Does that make sense?

“For example, if Michael Jackson is performing in a city, he is not going to perform for two promoters in the same night…

“Artiste are free to sing wherever they want. All I am saying to them, if they want to sing at another event on that night, they wouldn’t have any marketing value for me, so I will take them off that promotion. That’s their choice. There is no gun to anybody’s head. As an artiste you will go where you get paid the best and will give you mileage, if you are looking for mileage.

“I don’t see what the uproar is about.”

“I would never do that. That would not make sense because if I were to take off all the artistes’ music off the radio, what would I have to play? That would be counterproductive,” he said.

He said that when Hot 97 came on the scene it didn’t copy anyone. He told I-Witness News that while he does not think that the station is entitled to a monopoly he will protect his investments.

“This idea that I should embrace somebody coming in and trying to beat me. I embrace it in a sense; it’s competition, I can’t stop them, so I will compete with them.

“But in this particular instance, this things has been going on for years. It’s never bothered me. … But To think that for some reason I am just going to right now and say Ok, I am going to let you take a venture that I’ve put a lot of hard work and efforts into to make it one of the premier events for carnival,” Boyea told I-Witness News.

Chair of the P’Tani Carnival Committee Ronnie Marks told I-Witness News that he regards the ultimatum given to artistes as “bullying and intimidating”.

“It is not at all beneficial to the young artiste,” he said, noting the small window which they have to make money during carnival.