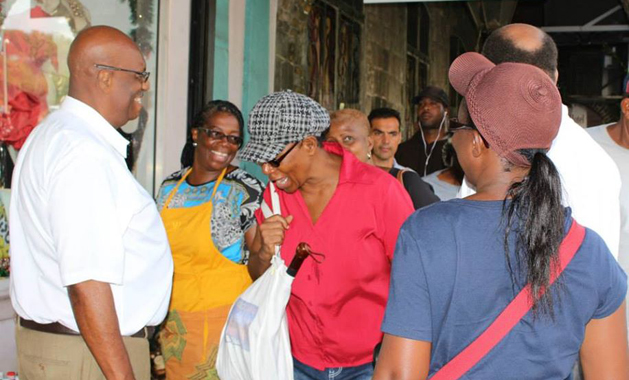 Slow or no sale was the major complaint among entrepreneurs in Kingstown during the New Democratic Party’s “listening tour” of the city last Friday, Leader of the Opposition Arnhim Eustace said.

He said that during the event, he and the party’s candidate for the next general elections talked to vendors, went into business, visited all three floors of the central market and spoke to persons along the road.

Eustace said that he had expected that since the activity took place on “Fantastic Friday” — the day of the National Calypso Monarch Semi-finals, he would have seen more shoppers in the market.

“That was not the case and there is a general complaint about the slow sales or the lack of sale given the state of our economy. That was the prevailing sentiment,” Eustace said Monday on his weekly radio programme.

“I spoke with many others and everybody the same story: business slow.”

The opposition team also visited the police canteen, located on the top floor of the market, and interacted with officers there, Eustace said.

“So we had a very useful day in my mind. We met quite a bit of people and explained our position on a number of issues.”

Eustace said they also visited the fish market, where he discussed with the manager a number of the issues related to the fishing industry that have to be dealt with if the sector is to improved.

He said the manager explained that the Grenada fishing industry is an EC$50 million business.

“And we have more water than Grenada. We have a greater economic space,” Eustace said.

He told listeners that the manager

was concerned that Vincentian fisherfolk were yet to adopt even some of the minimal changes in technology.