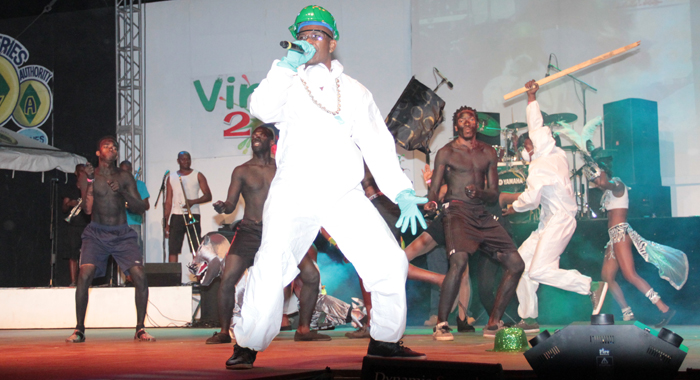 “Dutty Dancing”, the soca song that captivated carnival lovers and went on to win Road March 2015, was released one year after it produced.

The Hypa 4000 song was inspired by a Chauncey resident and artiste, Dirty N*gga, and his dance moves.

“I feel more joy, more blessings that feeling happy,” Hypa 4000 tells I-Witness News of his victory, which came a mere four years after be entered the soca art form.

Hypa 4000, a DJ whose name in that field is Shaney Hypez, tells I-Witness News that his feelings of being blessed were because of the struggles he went through to be accepted as an artiste.

Hypa 4000, a Sion Hill resident whose real name is Shane Husband, says he has seen other talented artistes give up because of the struggles.

“For me, just crossing that hurdle, it is more of a blessing.”

Hypa 4000 witnessed these struggles as he went about as a DJ, helping other young upcoming artiste, get deeper in the art form.

And it was from there that his interest in soca music grew.

“I always have a love or soca music but the interest grew from there from helping other artistes,” the Skatta singer says.

He has played a role in the production of music by Rus-t and used to be “a little force being Icon and even Skinny Fabulous in his earlier days”.

“That was the elevation going to the next level because everybody just knew me as the wine up king, because I was following the hype from Snap Shot. So we had to elevate to show people that we can’t just sing wine up song alone,” he said of Habitual.

“It’s a cross over of dancing. It has the jumpy feeling to make somebody wine. It has that medium tempo [older] folks can jump to, young people cane jump to,” he tells I-Witness News.

The song came about as the artiste and 4th Element, the producer, were in the studio in 2014 looking for the “perfect song”.

After they finished the rhythm, Hypa 4000 wrote the song based on the artiste, whose name they shorten to “Dirty N”.

“It was one of the quickest tunes I every built in my life,” he says of the song that was written on June 3, 2014.

“We were gonna release it and I told him (the producer) nah. I just got a vibe and something just told me not to release this tune,” he tells I-Witness News of the song, which became and instant hit when it was released a year later.

But his heart was in “Masquerade”, the track that they wanted to push as the carnival tune and the new face of Hypa 4000 this year.

“But you can’t choose for the people.”

Hypa 4000 and his team didn’t think Dirty Dancing was suitable for Soca Monarch so they went with Skatta, a decision the artiste regretted more and more as the competition drew closer.

“It was a mistake not to sing Dirty Dancing,” he tells I-Witness News, adding that even on the day of the show, persons were telling him that they were printing Dirty Dancing t-shirts.

But Hypa 4000 had already prepared his props, dancers and the like to perform Skatta at Soca Monarch.

However, just before going on stage, he had a side bar with the bandleader, telling him that he would switch to “Dirty Dancing” during the presentation.

“We risked the disqualification for the fans,” he said, telling I-Witness News that the contract that artistes sign with the Carnival Development Corporation says that any bard who sings more than one song is immediately disqualified.

“It was just mainly to please the fans — to be honest,” Hypa tells I-Witness News of his switch from Skatta to Dirty Dancing during the competition, a move that left many questioning on social media the decision.

But all that is history and Hypa 4000 plans to take his Road March win and his soca career “as far as it could go”.

He plans to work a lot marketing himself, and is already seeing some success.

He is booked for a show in Canada, and will make several performances in New York during the Labour Day celebrations. Also, he has received inquiries from England, although nothing has been finalised as yet.