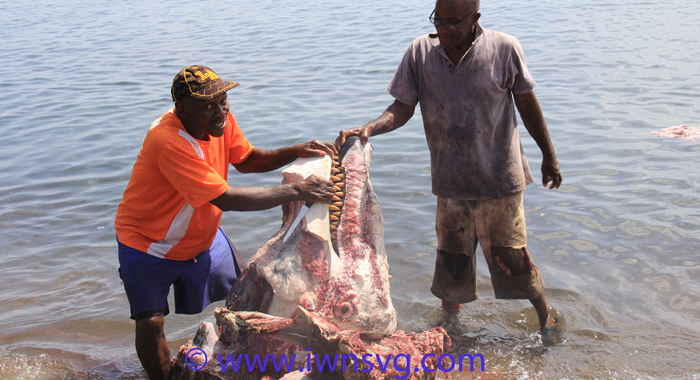 The business end of a killer whale is exposed as person remove the blubber from the head in Barrouallie on Sunday. (IWN photo)

Whalers in the Central Leeward town of Barrouallie were Sunday evening rushing to complete the processing of four killer whales (orcas) landed earlier that day.

The marine mammals, called “white fish” in Barrouallie, are not caught as often as pilot whales (“black fish”), the cetacean most often hunted as part of the decades-old tradition in the town.

Whaling continues in Barrouallie and Bequia notwithstanding international and some local opposition.

When I-Witness News visited Barrouallie Sunday afternoon, groups of men and women were engaged in various activities surrounding the processing of the meat and oil.

One interesting observation was a group of men some distance away discussing whether there was a link between orcas being landed live and house fires in the town.

They noted that the last two occasions that a live orca was landed a building burned down, as was the case Saturday night.

8 replies on “IN PHOTOS: Four killer whales caught in Bagga”