PM, vendors displeased with demolition of tables in K’town 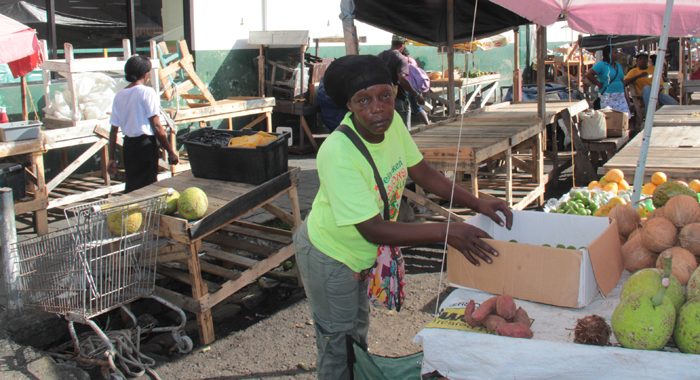 Vendor Venice George paid to have a new table built after hers was destroyed by Town Board staff. (IWN photo)

Prime Minister Ralph Gonsalves and vendors alike have expressed displeasure with the destruction of vendors’ tables and benches on Bedford Street (“Market Square”) in Kingstown during the carnival season.

The items were demolished by the Kingstown Town Board, reportedly after vendors failed to remove them from the area on June 28, as usually is the case.

Vendor Venice George of Yambou told I-Witness News on Wednesday that the Kingstown Town Board told vendors to take their tables and benches to China Town on the Reclamation Site when they are done selling.

“Normally, they (cart operators) go and work all about. So when they do come now to take up the tables here, these guys (Town Board) already come and mash up the tables and them.”

She said vendors had to gather pieces of wood to rebuild tables.

“I feel bad because I have to get another money and pay it,” she said in reference to the money’s spent to replace the tables.

She said that vendors also have to pay EC$5 every day to Town Board to sell in Kingstown.

Gonsalves expressed displeasure at the development at a press conference on Tuesday.

“I really don’t like what happened,” he said, and suggested that his government will replace the items destroyed.

He said some of the vendors are not carrying out their agreement with the Town Board in that on the weekend they are not removing their tables and benches from the sidewalk.

“And some of them really are in a terrible condition,” he said of the furniture that many residents have complained are an eyesore, in addition to cluttering the sidewalks across the city.

“But it has to be said that some of the tables and benches are in good condition, but on that morning, the 28th [of June], they (Town Board) took good and not so good tables which were there and took them to the landfill because the people didn’t move them, but they didn’t give any consideration that the Saturday evening in town, Saturday the 27th, it rained cats and dogs,” Gonsalves said.

“Now, I’m not saying that the persons who had the tables and their benches there, I am not saying that a lot of them are being reasonable, and they have to be reasonable and carry out the bargain; we have to remove them and especially the Carnival weekend, you would have a lot of people around, and Town Board, obviously would have to clear the place,” he said.

“But when you clear it, and especially the Saturday evening when it was raining so much, you should have a little bit more care the Sunday when you are going to clear them that you don’t just clear everything.”

Gonsalves said that the Town Board could have removed the items that are “rickety”.

“There are a few people who had good tables and benches and I went around there and they spoke to me,” he said, adding that when he goes to the market he don’t go for show or to look for votes.

“And that’s why people don’t boo me,” Gonsalves told reporters.

“I have spoken to Carl Williams about this, I have spoken to Julian Francis, who has direct responsibility for Town Board as Minister of State, and there are some people we have to try and help, who lost their good tables and benches.

“I am not taking about people who had a few rickety things and throw them down in any case and maybe,” Gonsalves said, but did not indicate how they will be distinguished.

The Prime Minister said he understands that it is difficult work that the Town Board is doing, adding, “but we have to have a sensitivity to people’s concerns and we have to exercise the authority with reasonableness and care.

“And if the Prime Minister speaks like this and those who are doing their job and I speak so publicly, I’m not denouncing them because it would be counterproductive to be involved in denunciation.

“I’m just urging them. Listen, let’s do it well, let’s do it properly and to urge people themselves who are using the streets and the roadside to be also be cooperative,” Gonsalves said.

5 replies on “PM, vendors displeased with demolition of tables in K’town”