‘An eruption of some sort at Kick ‘em Jenny underwater volcano’ 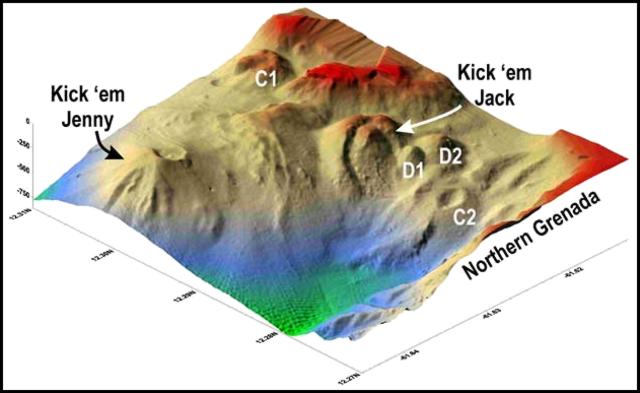 Richard Robertson, director the Seismic Research Centre in Trinidad, made the announcement on radio in St. Vincent on the Grenadines Thursday afternoon.

He, however, said there is no cause for alarm as the eruption is in keeping with the volcano’s behaviour over the past several decades and is unlikely to generate a tsunami.

Signs of elevated seismicity (earthquakes) began on July 11 and continue to present.

Since July 11, more than 200 micro and small earthquakes, of varying magnitudes, have been recorded, with the largest, prior to the strong signal Thursday morning, being less than magnitude 3.0.

On Thursday, from 1:25 a.m. to 3 a.m. local time, a strong continuous signal was observed on instruments monitoring the Kick ‘em Jenny, Robertson said.

“We have since analysed these signals, and based on a particular signature that you have when you have an underwater eruption, something that is called a t-phase, based on the fact that we have recorded one of these t-phases at monitoring station to the north of the eastern Caribbean, in fact ,in Montserrat they have recorded this t-phase, we can now confirm that this event this morning that occurred between 1:25 and 3, at some point between that time, there was an eruption of some sort at Kick ‘em Jenny underwater volcano,” Robertson said.

He said that people would not have noticed anything apart from the additional seismicity.

He said the earthquakes and their magnitude have increased to the extent that they are now being felt in some parts of northern Grenada.

“Essentially, the elevated period of activity at Jenny has continued.”

Robertson said that as has been the case in the past, there are periods of increased seismicity, which are sometimes associated with eruptive events.

He said the eruptions have most often usually not affected any surrounding areas.

“But … it is always possible that eruption magnitude could increase…” he said.

Robertson said that going forward the most likely scenario is that this period of increased seismicity will continue “for a little bit longer”.

“The most concerning aspect of it currently is for shipping that is associated with Kick en Jenny area,” he said.

The government of Grenada has increased the alert level for the volcano to orange, meaning that ships must remain five kilometres from the summit of the volcano to reduce the possibility of being affected by any eruptive activity.

Robertson said that seismologists continue to monitor the situation and are in close contact with disaster management co-ordinators in St. Vincent and the Grenadines, Grenada, and neighbouring countries as well as regional agencies.

The activities of Kick ‘em Jenny follows similar patterns that the volcano has displayed in the past, where there have been increased seismicity following some sort of eruptive activity.

The most common thing it does is it goes back to dormancy, Robertson said.

Scientists were expecting that something could have happened. “So, it is a bit overdue in that sense,” he said.

Robertson noted the concern about tsunami generation, but said there is no reason for such concern at this time.

He said there is always a possibility of events of larger magnitudes, adding that scientists will continue to monitor the situation and issue the relevant advisories.

He said it is too early to say what will happen but said that based on the depth of the volcano, the type of scenario in which the volcano will generate a tsunami is “very low”.

Robertson, noting the timeline, said there is no relationship with the activities at the volcano and a series of earthquakes off Barbados recently.