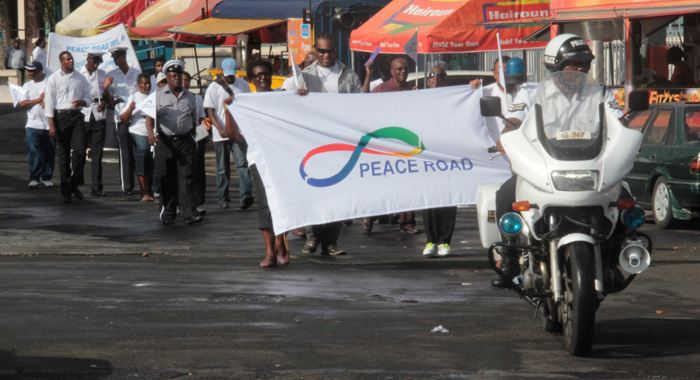 St. Vincent and the Grenadines’ chief detective has highlighted the importance of parenting in raising peace-loving citizens.

“Parents, I am calling on you to be responsible. Your role must be performed at all time. Exhibit love and peace in the homes so your children can be peaceful to their peers on the outside,” Head of the Criminal Investigations Department, Superintendent of Police Ruth Jacobs said.

She was speaking at the Universal Peace Federation’s “Peace Road 2015” march and rally in Kingstown last week.

“Investigate your children’s friends. Ensure they are in the right company at all times. Sending your children to the house of God will help in their spiritual development and will work in their favour,” the detective said.

“Dragging on conflicts will not do any good. Involve a parent, a teacher, a pastor, any responsible person in your community,” she said.

“You can walk away from any dispute. You can come to the any police station or department but ensure you adopt the best solution to the issue at the time.

“You can apologise. This does not mean that you are wrong and the other person is right. It means you value your relationship more than your ego,” Jacobs said.

Jacobs also spoke against domestic violence and urged persons not to resort to violence when one party wants to leave a relationship.

“Why should a man or a woman, having been in an intimate relationship, chop or stab that person to death because they want to leave that relationship?” she said.

Speaking at the event, Leader of the Opposition Arnhim Eustace said he rejects the definition of peace as the absence of strife, crime or violence.

“I think it is all the wrong way around. I think there is peace at the top and all these things challenge our peace. I don’t see peace as residual, something that is left back after other things are removed. I see peace at the crown and being threatened by some of these other things, like violence; but peace is supreme,” the New Democratic Party Leader said.

Eustace said that among the things that threaten peace in SVG are politics and the willingness of some citizens to remain silent when they should speak.

“… including the fact that too many of us are afraid to speak our minds. This fundamentally weakens our society and attempts to threaten our peace,” he said.

“And it’s high time that we in St. Vincent and the Grenadines take a new look at how define peace,” Eustace told the gathering.

Speaking at the same event, Anesia Baptiste, leader of the Democratic Republican Party, quoted Psalm 119:165 — “Great peace have they which love thy law: and nothing shall offend them.”

Baptiste said that love and respect for the Ten Commandments causes offence and violence to cease, thereby bringing about peace.

“You see, the love of God requires respect for the inalienable or God-given natural rights and freedoms of all people,” she said.

“When these fundamental rights and their attending freedoms are respected, then we have a scenario where there is social peace,” she said.

Organiser of the event, Kay Bacchus-Browne said that Prime Minister Ralph Gonsalves was invited but indicated that he would have been out of state at the time.

She said Gonsalves’ office said that he did not assign a representative to speak on his behalf as he had promised her he would.
The event included prayers of peace for SVG from members of the Christian community and a toast to peace.