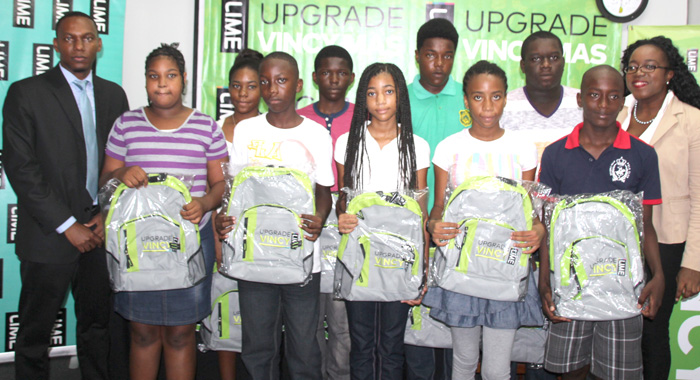 Successful candidates for the LIME Scholarship Fund were this week presented with their cheques and other items by the telecommunications provider.

LIME on Wednesday welcomed to their scholarship programme, four new recipients, who were successful in the Caribbean Primary Exit Assessment (CPEA), as it honoured its commitment to current scholarship holders, as well as the top CSEC student after remediation, and the top three students in the LIME sponsored public speaking competition.

The top three places in the public speaking competition to receive scholarship were Eric February, Damarley James and Chrislon Fraser, while Yannick Bacchus received a scholarship for his outstanding performance after remediation.

LIME General Manager Wayne Hull, addressing Wednesday’s gathering at the Professional Secretarial Services conference room, congratulated the students for their exceptional performances in their various examinations, and encouraged them to continue performing well, which is a requirement to them keeping the scholarships.

He also applauded the parents for the part they played in the success of their children.

Hull pointed out that the students were all well deserving of their scholarships, and noted that the scholarship programme was a pillar for the company.

He said that the initiative, which was started 31 years ago, was used to strengthen the relationship between the company and its employees, but has since evolved to incorporate the public.

The students will receive an annual grant from Form 1 to 3, with increases from Form 4 to their post-secondary education. The total investment for the duration of their school life is $10,600 per child.

Hull also indicated that the company now offers services that are tailored to the needs of students, and encouraged the parents who have not yet done so, to visit LIME stores and sign up for these services, which would be beneficial to their children.

Three of the four parents of the new scholarship awardees also used the opportunity to thank LIME for the assistance.

Davd Ellis, Kalissa Smart and Ianca Lucas expressed their gratitude, saying that the scholarships would go a long way in easing the financial strain, and vowed to do their best to ensure that their children maintain satisfactory marks.

More than one hundred students have received scholarships from LIME over the years, with a number of the recipients moving on to higher achievements, thanks to the boost from LIME.