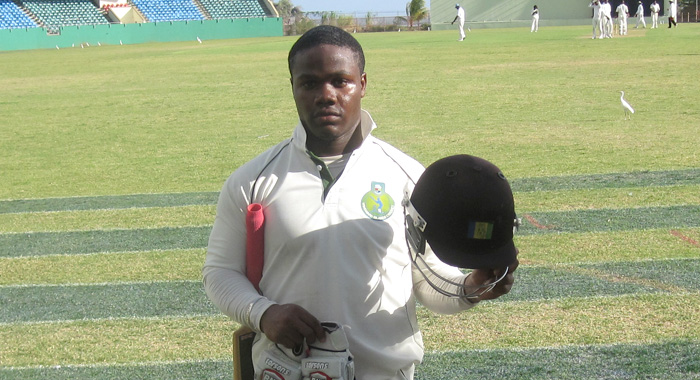 Despite trial matches and practice sessions having been badly affected by the weather, coach of the St. Vincent and the Grenadines (SVG) senior cricket team Deighton Butler is still upbeat about his team’s chances in the tournament.

The tournament will bowl off here on Aug. 20 with SVG hoping to use home advantage to regain the title they lost last year.

Butler said that whatever little time they have had in the middle has seen some good performances from some of the batsmen, with Sunil Ambris hitting a century and captain Lindon James and others getting some good scores.

The squad still remains at 18 with the coach saying that the final 14 should be named next Friday.

Butler said that with concentration will be on net sessions now and he is hoping that the players will continue with the same level of intensity to fight for selection.

The team will be missing star batsman Donwell Hector this year after the player who asked not to be considered as he choose to take a sabbatical.

Butler said that Hector, one of the team’s most talented and prolific batsmen, has contributed in a large way with the bat over the years and his experience adds a lot.

He, however, pointed out that Ambris, who did not play last year, will step in to fill the breach and his ability and talent should see the team still performing with the bat, adding, “the nucleus of the team is still there”.

Another player who the coach was hoping to have in his line-up was the exciting allrounder Casmond Walters but the player, who is currently campaigning in the Bradford League in the United Kingdom, decided to skip the tournament. Walters, a 25-year-old hard-hitting, right-handed batsman and right-arm offspinner, Walters lit up the local scene in all formats with his breath-taking performances at the wicket.

The coach said the bowling should be stronger this year with the return of veteran Kenroy Peters, who missed last year’s tournament. Peters, 33, was called up by the West Indies as a replacement for Kemar Roach on their tour of South Africa but only played a solitary test before being discarded.

Peters, a left-arm seamer, has been the leading pacer in the regional first class season over the last two years and was the top wickettaker over all in 2014.

The team will also be strengthened by spinning allrounders in Alston Bobb and Keiron Cottoy who were both in Barbados — Bobb with family matters and Cottoy with UWI studies.

Cottoy, who was called up by the St. Lucia Zouks for the Caribbean Premier League (CPL), received positive comments for his bowling, which saw him pick up 4/18 against Guyana Amazon Warriors.

He said Johnson, who has suffered a series of injuries within the last two years, is currently nursing an ankle injury while Jordan, who is coming off a prolonged lay-off with a shoulder problem, now being affected by a side strain. He said both players are under the supervision of top physio, Denis Byam and are responding well to treatment.