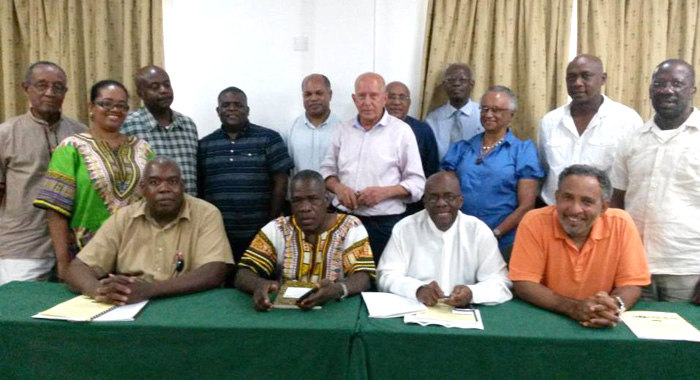 NDP leadership and executive members pose along with the visiting Garifunas after a closed-door meeting last week Friday. (Photo: NDP/Facebook)

The main opposition New Democratic Party (NDP) has announced the signing of a “declaration of intent” with visiting Garifuna leaders, outlining “the agreement between the Garifuna and NDP to deepen and strengthen ties”.

The accord, dubbed the “Grenadine House Declaration of Intent”, also chronicles the one-week visit of Garifuna leaders professor Wellington Ramos and Joseph Guerrero to St. Vincent and the Grenadines.

Ramos, who is originally from Belize but is based in the United States, is vice-president of Garifuna Nation and the United Garifuna Association Inc.

Guerrero, who is also based in the United States, is Garifuna Nation’s director of Reparations and director, Arts and Entertainment at United Garifuna Association Inc.

NDP spokesperson Vynnette Frederick, in a statement on Friday, said that the parties agreed to deepen the relationship in a number of ways, including supporting and encouraging exchange programmes in the areas of culture, education, health and sports, and developing and disseminating the Garifuna language and culture, in St. Vincent and the Grenadines (SVG) and in Garifuna populations elsewhere.

They will also forge alliances for the purposes of trade in goods and services, with great emphasis on tourism, as well as highlight the socio-economic and socio-political conditions under which Garifuna people exist in SVG and elsewhere.

The declaration of intent also says that both parties will strengthen the spiritual bond and re-establish the historical link between the inhabitants of SVG and the Garifuna Nation.

The party said that the collaborative efforts will be pursued within the context of the honorary citizenship programme that party leader Arnhim Eustace announce earlier this year.

“The NDP and the Garifuna Delegation do promise to continue collaborative efforts to expedite the process of building closer ties with each other and realising the dream of making St. Vincent and the Grenadines the spiritual home of all Garifuna people at home and abroad,” the declaration said.

10 replies on “NDP and Garifuna leaders sign ‘declaration of intent’”