Vincentian gets scholarship to study rehabilitative counselling in the US 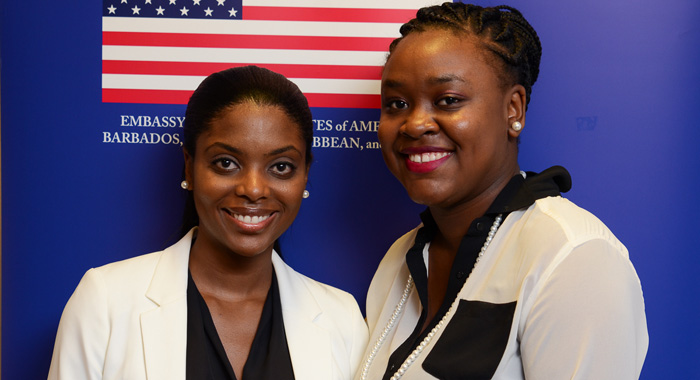 Vincentian Kimberley Cambridge, right, and Barbadian Charlene James will be traveling to the United States as Fulbright Foreign Students.

Vincentian Kimberley Cambridge will travel to the United States this month to begin pursuing master’s degree in rehabilitative counselling, funded by the U.S. Government under the Fulbright Foreign Students programme.

Cambridge recently completed her undergraduate degree in psychology at the University of the West Indies.

Barbadian Charlene James will be also be travelling to the United States as a Fulbright Foreign Students, and will attend University of Wisconsin-Madison to pursue an MBA in Risk Management and Insurance.

Her compatriot, Samuel Soyer, who is an instructor at the University of the West Indies, Cave Hill campus in the Faculty of Humanities and Education, has been chosen by Alabama State University to teach Caribbean literature and culture for the academic year 2015-2016.

James, who was an Associate in Client Relations at Caribbean Risk Managers Ltd. in Barbados, will attend University of Wisconsin-Madison to pursue an MBA in risk management and insurance.

The Fulbright programme is the flagship international educational exchange programme sponsored by the U.S. government, and is designed to increase mutual understanding between the people of the United States and the people of other countries, the U.S. Embassy in Barbados said in a statement.

The Fulbright Foreign Student programme enables graduate students, young professionals, and artists from abroad to research and study in the United States for one year or longer at U.S. universities or other appropriate institutions.

The Fulbright Scholar-in-Residence programme allows accredited U.S. colleges and universities to submit proposals to host foreign lectures on their campuses.

It is virtually the only Fulbright programme that enables visiting scholars to lecture in the United States, thereby providing scholars with significant professional benefits by teaching in the United States, gaining an understanding of Americans and of American institutions, society and culture, and using new-found teaching and community experiences after returning to their home country, the embassy said.