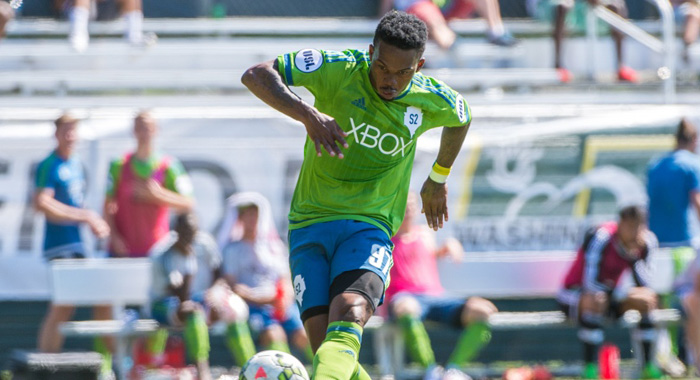 St. Vincent and the Grenadines striker, Myron Samuel made an euphoric start with the Seattle Sounders FC 2 by scoring twice and laying on an assist to lead the club to a 3-2 victory over Colorado Springs Switchbacks FC on Wednesday.

The win pushes Sounders 2 into second place in the USL Western Conference with 39 points, tied with LA Galaxy II and the Switchbacks one point behind Oklahoma City Energy FC.

Samuel, who took the field in the second half, found the net in the 51st and 86th minutes — goals that were split by his assist to see Sergio Mota getting on the scoresheet in the 78th minute.

Sounders disclosed earlier this week that they had added the Vincentian to their Roster affording him the opportunity to showcase his sublime talent on the highway leading to the world stage.

It has been expressed in footballing circles that Samuel has the boots which could see him make a fortune, but some say that there is also a head, which if not kept level, could blow it all.

While reports say that as per club policy, additional terms of the agreement are not disclosed, Samuel 22 is expected to be in line to make much more than from his flirtation with regional club football.

Samuel has made 46 appearances for “Vincy Heat”, the SVG Senior National Team, scoring 17 goals including 1 goal in a 4-4 draw against Guyana in FIFA World Cup Qualifying.

Samuel, who just missed being part of the SVG U23 team by a few months, has spent a few years campaigning with clubs across the region, first with Ian Sardine’s System 3 FC in St. Vincent and most recently playing for Rendezvous FC in Barbados.

Samuel returns to Sounders set up four years after he appeared in one reserve match for Seattle Sounders FC under direction of then head coach Hendrickson.

Samuel, like Anderson a lightening pace mercurial striker, has also manufactured a penchant for finding the net and has also developed a fan base among local football lovers.

“Myron is a player I have been watching for some time and he has been very good for his national team,” said S2 Head Coach Ezra Hendrickson, a former St. Vincent national team captain.

“We think he will be a strong addition to this club and we see a bright future for him in the Sounders organization.”

The top two clubs in each conference earn a bye through the first round of playoffs as well as the right to host the following round.

Meanwhile, SVG U23 footballers failed in their bid to reach the 2016 Olympic Games after losing their semi-final game 0-1 to Haiti and 2-3 to Jamaica in the third place play-off at the Stade Syvio Cator in Port-au-Prince.

The win for the Haitians put them through along with Cuba to the CONCACAF round, which kicks off in the United States in October.