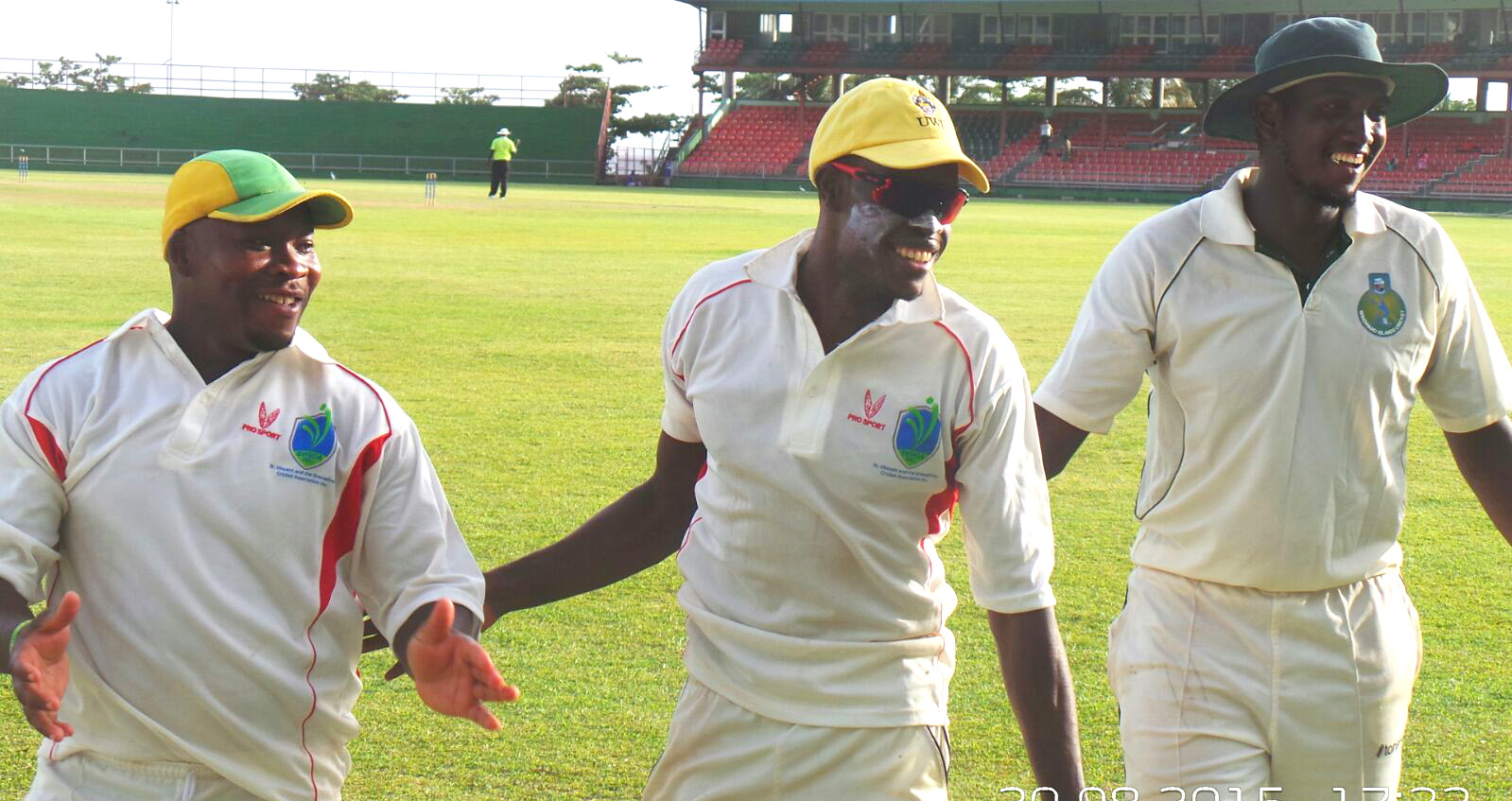 Grenadian opener Devon Smith, benefitting from sloppy catching by St. Vincent and the Grenadines, registered a commanding century while fast improving legspinner Keron Cottoy grabbed a late hat-trick on the opening day of action of the Windward Islands tournament at the main Arnos Vale Playing Field.

The Grenadians, who were asked to bat, were dismissed for 292, with Smith hitting 147, debutant Emmanuel Stewart 58 as left-arm spinner Alston Bobb took 4/80, Cottoy 3/71 and Kenneth Denber 2/54.

Smith, who reports say has been making demands to captain the Windwards, should have gone in the third over for 4 but his edged drive of Delorn Johnson was badly missed by Romel Currency at second slip moving to his left.

The diminutive left-hander grew in confidence as he unfurled his full repertoire of shots against spin and pace alike. He lost opener Herron Campbell (20) with the total on 31 and saw two more wickets go down before the 50 had been posted. His team in more than a spot of bother at 49/3, Smith was then joined by the talented 18-year-old Emmanuel Stewart, who was making his debut. And with a name similar to that of the late famed boxing trainer, Emmanuel Stewart, the little Grenadian displayed a pugilistic nature as he confidently punched his weight.

Showing a level head that belied his age, Stewart rotated the strike well and dispatched the bad balls with effortless ease. He raised his maiden half century off 114 balls, 148 minutes and struck 5 fours and 1 six. Smith had earlier reached the landmark off 113 balls in 160 minutes with 6 fours. Smith received his second chance once more off the bowling of Johnson on 74 when Sunil Ambris who had replaced his brother at second slip, failed to react in time to get a hand to another edged drive.   Smith brought up his century during his partnership with Stewart off 206 balls 304 minutes with 12 fours.

The pair added 134 for the fourth wicket before playing across one from Bobb. Stewart missed and was bowled for 58. He struck 6 fours.

Smith was then joined by younger brother Dennis Smith and they added a further 77 runs before the older sibling had his off stump hit by Bobb as he “shoulder arms” to make it 260/5. Dennis went at 281/6 taken by Keeper Lindon James off the bowling of Bobb for 33. Then, in a dramatic slide, the last 5 wickets went for 11 runs with Cottoy removing Dennis George (1) Josh Thomas (0) and Ryan John (23) to claim his first hat trick at that level.

In the three overs the Vincentians faced before stumps they lost the wicket of Gidron Pope (6) who played an ill-advised attacking shot to a ball delivery to Nelon Pascal and only succeeded in lofting a catch to Dennis George at cover. Miles Bascombe was unbeaten on 7 and the total 13/1 and Pascal 1/8.

Over at the Sion Hill Playing Field, Dominica looked to be in charge after ending the day 141/2 relying to St. Lucia’s 203/9 declared. When stumps were drawn, Jelarni Robinson was unbeaten on 81 and with him was Oscar George (3).

Earlier, St. Lucia who were asked to take first knock after losing the toss, called a halt to their innings with the last pair at the wicket in a move to deny their opponents another bowling point. This has become a significant feature of the regional game with the abolition of first innings points