SVG fight back against St. Lucia in low-scoring tussle 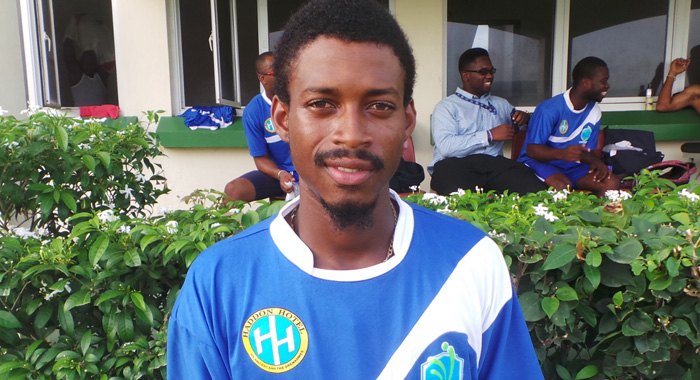 St. Vincent and the Grenadines made a game fight back in their second round Senior Windward Islands match against St. Lucia at the Park Hill Playing Field on Saturday.

The home team, after being skittled out for 132, had hit back to have their opponents 122/6 by the close of play.

Winning the toss and deciding to bat at the Park Hill Playing Field, the Vincentians were indebted to Atticus Browne who had replaced Gidron Pope from the last match against Grenada for their eventual total.

Browne, who opened the innings, hit a patient 42 — the top score of the match so far.

He was seventh out with the total on 88, caught off the bowling of Polius to end an innings which was compiled over 168 minutes, 120 balls with 4 fours. Kenneth Dember got 21 while Keron Cottoy, who struck a record-breaking 150* on Friday against Grenada, failed to score.

Sunil Ambris, who was also among the runs against Grenada, was among those recording a failure as well, being bowled by Craig Emmanuel for 7.

The SVG innings lasted 59.5 overs on a pitch which provided many challenges for the batsmen with its low bounce and appreciable turn for the spinners.

Bowling for St Lucia, off spinner Larry Edward took three for 12 in 7.5 overs, medium pacer Craig Emmanuel 2 for 16 in 8 overs, legspinner Dornan Edward 2 for 18 in 3 overs and offspinner, Dalton Polius 2 for 24 in 8 overs.

St Lucia, in their reply, lost wickets steadily as the Vincentians tried to give the crowd, which had turned up at this rural venue, something to shout about.

They bowled accurately, keeping the St. Lucian batting on a tight leash with Delorn Johnson only giving away 10 runs from his 5 overs and Darnley Grant 9 from his 4 overs.

Then it was the turn of the spinners who gave away little while picking up wickets with Alston Bobb and Keron Cottoy in particular creating tremendous problems.

Despite this, the St. Lucians were still able to survive to the close — ending the day on 122 for 6 in 49 overs, with the not-out batsmen being skipper Craig Emmanuel on 26, and Larry Edward on 20, who have put on 41 unbroken for the seventh wicket.

St. Lucia resumed 12 runs in arrears but more importantly looking to take their score past the 200 to secure some batting points since first innings points are no longer on offer in these matches.