St. Lucia on top against Grenada in Windwards cricket 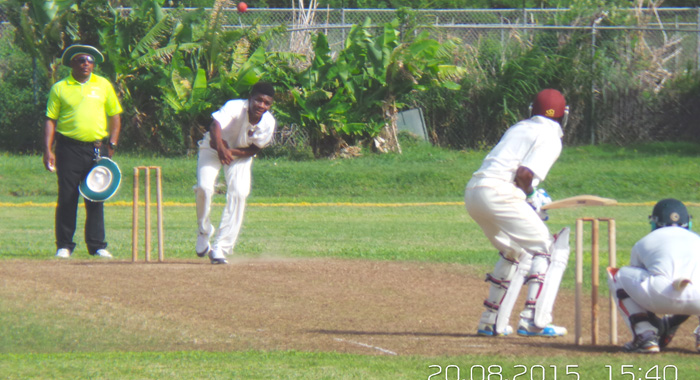 Bottom of the table St. Lucia were in a commanding position in their final round match of the 2015 Windward Islands Senior Men Cricket Tournament against Grenada at the Sion Hill Playing Field on Tuesday.

Grenada, winning the toss and taking first knock, were in early trouble after losing their talismanic batsman and captain Devon Smith early in the proceedings.

He was caught by Johnson Charles — who had taken over the gloves in this match — making the total 27/1.

Dennis Smith was caught by Keddy Lesporis off Dalton Polius for 7 with the score on 48/2 while Andre Fletcher was run out to make it 57/3.

Herron Campbell was athletically caught one-handed by Awene Edward at mid-off off Larry Edward for 10 – taking the score to 70 for 4.

Roland Cato played down the wrong line to a googly from the impressive Dornan Edward to be adjudged LBW for 37 to see the total 83 for 5.

Emmanuel Steward, having recovered from the blow to the head from a Vincent Lewis bouncer on Sunday in the match against Dominica at Arnos Vale, looked tentative and unsure in making 6 before hitting a catch to mid-on off Polius — 93 for 6.

Edwards, who was proving a handful, then trapped Nelon Pascal LBW for nought and in the next over bowled both Craig Phillip and Josh Thomas with successive deliveries — both without scoring — to dismiss Grenada for 98.

Derron Hypolite was unbeaten on 11.

In reply, St. Lucia, behind a fine half century from Johnson Charles, reached 192/7. Charles, who put on 60 for the first wicket with Tarryck Edwards (10), struck 8 fours and 2 sixes in getting his second half century of the tournament.

Skipper Craig Emmanuel chipped in with 34, while Dornan Edwards was unbeaten on 23.

Keddy Lesporis (19) was forced to retire hurt with a damaged wrist sustained while batting.

Denis George has so far taken 4/60 and Derron Hypolite three for 44.

The match ends on Wednesday