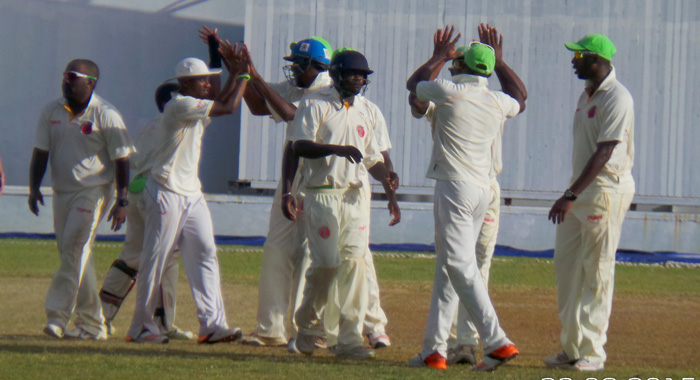 The match ended in a draw with SVG being dismissed for 205 just before tea on the rain-affected second day, as SVG was replying to Dominica’s 232.

Resuming on 88/3 with Gidron Pope on 10 and Romel Currency on 9 and with the title a receding shimmering dot in the distance, the hometeam were never allowed to settle.

The pair saw the total to 104 before Pope (21) was trapped in front by Shane Shillingford. Two runs later, captain Lindon James (5) went the same way to give the bowler his third wicket — all by the LBW route.

In between the showers, Cottoy and Currency, who reports say could be at the end of his SVG career, added 29 for the sixth wicket when Cottoy, who has failed to replicate anything close to his record-breaking 150* against Grenada, went for 15.

Currency, whose 31 had come in three minutes short of two hours, was caught at the wicket off Kevin James at 143/7. Alston Bobb (31) then added crucial runs with the tail but was involved in the runout of both Dawnley Grant (17) and Kenneth Dember (10). And after seeing the total past the 200 mark, Bobb was given out LBW to Tyrone Theophile’s offspin at 205.

Shillingford finished with 3/64 from 30 overs with 7 maidens and Kevin James 2/51 from 13 overs with three maidens.

The match was called off shortly after.

Dominica, who won the toss and elected to bat on the opening day, batted in a very focussed manner like a team bent on making sure that they did not relinquish their title easily.

After falling into some early trouble to be 49/3, they were taken to a zone of relative comfort by captain Liam Sebastien (86) in an innings of maturity and command. Arriving at the wicket with his team 2/17, he took control of the innings until he was seventh out at 192, caught close to the wicket. He struck 12 fours, faced 147 balls and batted 196 minutes. Theophile got 39, while Cottoy took 4/40, and Dember 2/44

Dominica ended the tournament with 41 points and SVG, 33.