Farmer being terrorised after handing over gun to police (+Video) 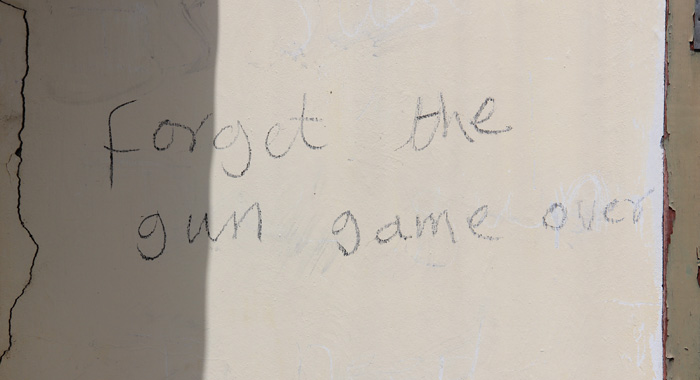 One of the messages written on Hugh Stewart’s house in Collins, after he turned over to police a gun he found on his property. (IWN photo)

When 70-year-old farmer Hugh Stewart saw what looked like a gun in a building on his farm in Collins last year, he summoned the police.

But since then, he has been terrorised by unknown person(s) who have burnt two of his banana sheds; burglarised his house, leaving threatening messages on the walls; and his vehicle was set on fire last week.

“I saw what appeared to be a gun in a drum in there, a barrel inside,” Stewart told I-Witness News outside a storeroom.

“So I immediately called the police and they came and take way the gun. That was the last time I saw it,” he said this week.

He said the gun was about two and a half feet long and wrapped in plastic.

Later that same week in 2014, he heard a noise outside and saw someone near his office building, near his house.

“I said, ‘Leave it alone and get away from there and don’t come back.’”

Steward later went to bed only to be awoken by the sound of crashing glass.

Someone had broken into the office building and wrote on the wall in charcoal: “put back me f**king gun before Monday game will start soon”.

He said he wrote a response message on a chalkboard that he used to teach agricultural economics to the 10 employees on the 40-acre farm.

In the message, Steward said that he did not have the gun and the person(s) inquiring about it should check with the police.

One message read “put it back or” while another, also written in charcoal, said, “me wah me gun”.

The intruders gained access to the house by beating out burglar bars on the ground floor.

Stewart told I-Witness News that he has reported each incident to the police, but the harassment continued into 2015.

Two banana sheds on the farm were set afire on April 28, resulting in EC$20,000 in damage and loss, Stewart said.

Around that same time, the house was burglarised and the intruder(s) wrote on the wall: “you have my f**king gun and still giving me talks? F**k you”.

The house was also burglarised on July 24 and August 9 and the burglar(s) cut the plug for the washing machine and the fridge and spilled the contents of the rooms onto the floor.

Stewart’s clothes were also thrown onto the floor and the bathroom pipe was left running, flooding the ground floor of the two-storey house.

Stewart, who lives alone, said that someone broke into the house last week Thursday and stole a set of keys to the house and removed the cover for the gas tank on the pick-up truck that was torched two days later.

On Friday, he bought new locks for the doors of the house, but could not find a lockable cap for truck’s fuel tank.

Stewart said he was chatting in his patio with a friend who is a police office last Saturday night.

Around 7:45 p.m. after the friend left, Stewart said he heard an explosion and realised that his vehicle was on fire.

He called the police in Kingstown and Marriaqua. Police in Kingstown responded, but by the time they got there, the neighbours had out the fire, which all but destroyed the vehicle, which Stewart said was worth around EC$15,000.

Stewart told I-Witness News he is concerned about his personal safety.

“But right now I am more concerned about their safety. Because when I let lose on them, God almighty help them.”

He says he believes he knows who is responsible for tormenting him, noting that while burglary is a problem in the area, the graffiti on his walls began after the gun was handed over to the police.

“On Saturday night, after we out the fire and everybody left, they came back, who ever it was or they were, and they cut the hose we used to out the fire and they mark up on the wall outside ‘Have mercy on me.’

“That’s what they are pleading for now: mercy. It is not for me to give them mercy. They almighty gives them mercy. I forgave them several times already, I pleaded with them, I do not have your gun, I do not need your gun. Several times, but they would not listen,” he said.

“The police have the matter in their hands and they have to do what they ought to do.”

Stewart, however, noted that residents are aware of what is happening in the area.

Stewart’s family bought the house and farm in 1985 and he has been living in the house since 1996.

Asked if he has considered moving out, Stewart told I-Witness News:

“Where to? Do you think I should go to the barracks and live? Do you think that will be the safest place? Move out to where? Or Botanic Gardens, the top of Botanic Gardens up there or up to Gorse? I have plenty options,” he said, adding at he plants to move to another Caribbean nation soon, but “not really” because of the development over the last year.

Stewart said he firmly believes that he is being tormented because he handed over the gun to the police.

“I don’t have enemies. Where I see somebody is hard-pressed and so on or not doing well, I say, that could have been me,” he said as he broke into tears.

Noting that the writer of the message asked for mercy last Saturday, Stewart said he believes that his tormentor(s) are “coming to their senses because they know we will go after them.

“If I am gone from this world, I have my brothers and sisters will to go after them, not to mention my children more eager to go after them. And they may not be as kind as the police,” he told I-Witness News.

In addition to the shed and vehicle, Stewart said he has lost about EC$10,000 in foodstuff to burglars over time and paid EC$3,000 to install burglar bars.

Stewart told I-Witness News he believes he has suffered EC$75,000 in damage and loss as a result of the crimes against him.