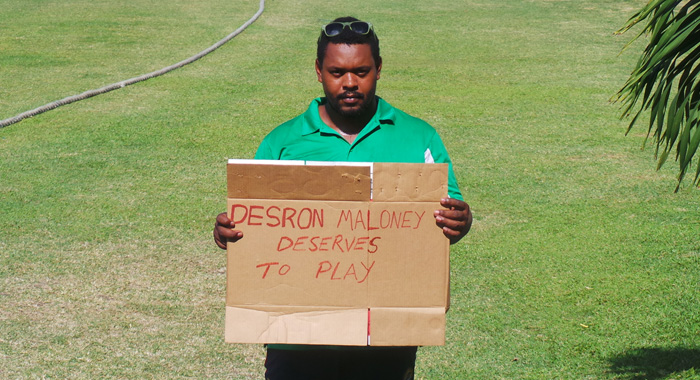 Protests at sporting events have been a rare occurrence in St. Vincent and the Grenadines, so whenever one takes place, it gets the attention of the public and most definitely the object of the protest.

In 1969, cricket fans, incensed that Ken Toppin, a Barbadian residing in St. Vincent, was given the nod over Sam “Bugsy” Layne as wicketkeeper in as match against Dominica at the Victoria Park, proceeded to “boo” the player each time he touched the ball.

Their hostility was even more glaring when Toppin was out for a pair — LBW both times — and they celebrated his demise with shouting and cheering.

Then it was the turn of a legspinner, Osbourne Browne who found himself — mystifyingly to most people but apparently not to himself and the Radcilffe cabal — in the SVG team for a Windward Islands match at Arnos Vale. Browne’s selection was at the expense of fastbowler, Jerome Samuel — a player from the Sion Hill community.

This resulted in the game nearly not starting on time since the stumps to be used belonged to the Sion Hill Club and manager of the club, Lloyd Lewis, changed his mind about lending the stumps. It took a contingent of club members, led by Winston Davis, to journey to Roseau in Sion Hill to get the obdurate Lewis to change his mind.

The match got on the way and Browne, like Toppin a few years before, was roundly “booed”.

Layou residents, in their time, thought they had a cause to protest when the skilful Marcus Young was constantly omitted from the SVG team while “Sheen” Millington was included. But they eventually grudgingly, as it seemed then, accepted that Millington was the superior player.

Then in 1986, Vincentians journeyed to the Arnos Vale Playing Field to show their disagreement with England selecting to tour the Caribbean a player who had gone to racist Republic of South Africa. Among the protesters was an eminent politician who then travelled weeks later to Antigua to watch the same team take on the West Indies.

The community of Sion Hill, always ready to “fight for their rights”, did so when the Keith Joseph-led SVGAAA barred their team from taking part in a road race. Stony-faced and unsmiling, they stood at the side of the road brandishing their placards and clearly resisting the “spirit of old” to “mash up” the race.

The years have passed with some grumblings over team selections but it began and ended there.

That was until Tuesday, Aug. 25, 2015 when local premier division cricketer, Rodger Gibson turned up at the Arnos Vale Playing Field just prior to the start of the match between SVG and defending champions, Dominica, to show his disappointment over the omission of his ASCO teammate Desron Maloney.

Gibson later said Maloney has been one of the leading players in cricket in SVG and he has not been given a fair chance to play on the national team.

“Maloney plays hardball, softball, two-day cricket, limited-overs and T20 and he dominates in all forms, so why is he being treated this way?” Gibson said.

He said that Maloney was the Premier Division leading runscorer in 2014 and the second highest run-getter in 2015 yet he cannot get a play, while other in the team are failing. He pointed to the returns of the experienced pair of Miles Bascombe and Romel Currency whose combined runs up to the second round of matches was less than a hundred.

President of the SVG Cricket Association Kishore Shallow said that Maloney was just unfortunate and since there are players who may not be around next year the player must continue to score runs and “keep himself in the frame”.