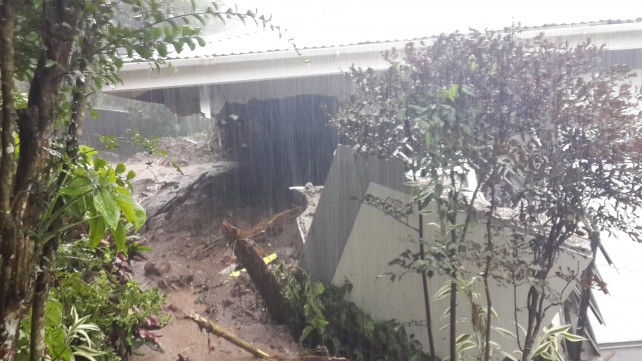 A retired policeman and his wife were injured when a landslide crashed into the back of this dwelling house at Castle Comfort. (Photo: Dominica News Online)

BRIDGETOWN, Barbados (CMC) — Tropical Storm Erika was moving towards the Dominican Republic on Friday leaving in its trail death and destruction in Dominica and other Caribbean countries.

Prime Minister Roosevelt Skerrit has described the destruction as one “of epic proportion” and said that rescue teams from Venezuela, Trinidad and Tobago and the French Caribbean are due in Dominica on Friday.

Skerrit said that the worst affected area is Petite Savanne, south-east of the capital where as many as 20 people may have been killed as the storm made its way across the Lesser Antilles on Thursday.

Works and Communications Minister Ian Pinnar, speaking on a radio programme in Trinidad and Tobago, said that 14 bodies had so far been recovered and at least 25 other persons are missing.

There are also reports of people missing in other communities and while public servants have been advised not to report for work on Friday, Skerrit said he was urging them to assist in the cleaning up of their various communities.

“The French government is assisting us in search and rescue missions in Petite Savanne,” he said, noting that they have already provided Dominica “with an aerial view of Dominica and the extent of damage.

“That is being reviewed now by our technical people with a view to putting a report together … but our full attention is being placed on Petite Savanne,” Skerrit said, noting that the French team has already airlifted medical teams into the area.

“Our major concerns, as I said, now is on people, on human beings. We will look at the infrastructure later on but all our efforts are on locating every single citizen who is missing and that’s what we are doing in Petite Savanne. It is very, very serious in Petite Savanne,” said Skerrit, who is expected to address the nation later on Friday.

“This is a disaster of epic proportion … The damage is massive,” Skerrit said.

The Miami-based National Hurricane Centre (NHC) said that the storm, with maximum sustained winds of 50 miles per hour (mph), was expected to weaken Friday as it moves over land, followed by a little change in strength through Saturday.

NHC said that at 5 a.m. (local time), that the center of Tropical Storm Erika was located near latitude 17.7 North, longitude 67.7 West and is moving towards the west-northwest near 17 mph.

NHC said that this general motion is expected to continue for the next 48 hours.

“On the forecast track, the centre of Erika will move over the Dominican Republic Friday, move near the Turks and Caicos Islands tonight, and move near the central and northwestern Bahamas Saturday and Saturday night,” NHC said.

Meanwhile, the St. Lucia-based Organisation of Eastern Caribbean States (OECS) Commission says it is mobilising regional and international support to reduce Dominica’s plight as that country rebuilds following the passage of the storm.

“The directorate of the OECS Commission is very concerned about the situation in Dominica and is communicating with heads of other OECS member states, the international donor community and organisations to ensure the best possible actions.

“As small island states we have common vulnerabilities to climatic issues and weather systems which impact on all our member states and although limited in our own resources we are strengthening our response to Dominica through dialogue towards a coordinated response from agencies such as National Emergency Management Organisations, CEDEMA, ECLAC and USAID,” the Commission said in a statement.

“Our prayers go out to those who are hurt by this phenomenon at this time and we are confident that the spirit of community and resilience for which Dominica is well known will restore that country’s glowing physical and socioeconomic landscape,” it added.