Death toll in Dominica rises to 20 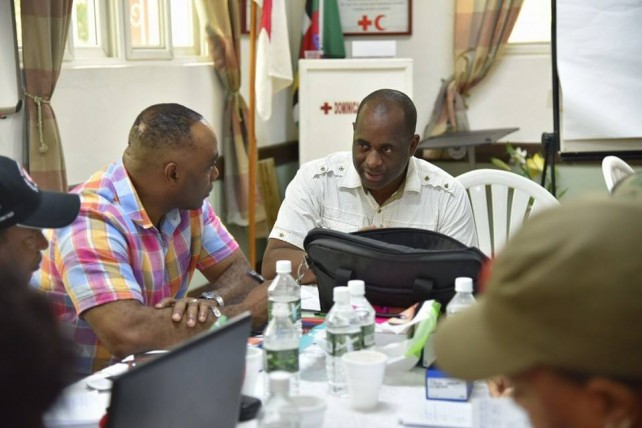 The Prime Minister of Dominica Roosevelt Skerrit in meeting with cabinet and other disaster officials. (Photo: Dominica News Online)

ROSEAU, Dominica (CMC) — Dominicans on Saturday returned to the grim task of searching for survivors following the passage of Tropical Storm Erika on Thursday that has so far killed 20 people and left several others missing and presumed dead.

Prime Minister Roosevelt Skerrit in a radio and television broadcast Friday night said he would be meeting with all 21 elected legislators on Saturday as the country develops a united approach to its reconstruction that could cost millions of dollars.

Erika, which was dissipating as it moves across the Dominican Republic and Cuba on Saturday, hit the island dumping more than 12 inches of rain and causing, in the words of the prime minister, “extensive damage across our small island after floods swamped villages, destroyed homes and wiped out roads”.

But Skerrit made it clear that the emphasis now was on reaching every village cut off by the storm and trying to local every missing person.

The worst affected village is Petite Savanne, where landslides swept away homes causing many of the deaths so far and where at least 25 other people are reported missing.

Late Friday, the Barbados-based Caribbean Development Bank (CDB) said it was providing US$200,000 in an emergency relief grant in accordance with the CDB’s Disaster Management Strategy and Operational Guidelines, and is aimed at assisting the country in its response to the disaster.

Emergency relief grants are coordinated through the Caribbean Disaster Emergency Management Agency, based on damage and needs assessments and in close coordination with the development community.

“We are saddened by the loss of life and how the disruption caused by this storm will affect the lives of Dominicans. We are in touch with the Government of Dominica; working with CDEMA and are standing by to provide concessionary financing, in addition to the grant, to help the country rebuild,” said CDB Vice-President of Operations Patricia McKenzie.

The Dominica government has also established a recovery and reconstruction fund through an account at the St. Kitts-based Eastern Caribbean Central Bank (ECCB).

Meanwhile, Chairman of the Council of Ministers that manages CDEMA, Adriel Brathwaite, said assistance would be forthcoming after a team comprising officials from CDEMA and the Department of Emergency Management travelled to Dominica to conduct damage assessments.

“We needed to put the logistics in place to have an assessment in terms of the scale of their damage. In disaster recovery one of the errors that people make is believing that you automatically know what the country requires. That is not the case,” said Brathwaite, who is also Barbados’ Attorney General.

Brathwaite said the international partners have been put on notice that their assistance would also be required.

Regional airline, LIAT, which has suspended all flights into the island because of the closure of the Douglas Charles Airport, north of here, has expressed regret at the loss of life and human suffering as a result of the storm.

“It was with a deep sense of sadness that all of us at LIAT learnt of the devastation and tragedy caused by this natural disaster,” the airline’s chief executive officer, David Evans, said in a message to Prime Minister Roosevelt Skerrit.

“As you deal with this tragedy, please be assured that all those who were affected are in our thoughts,” Evans said.