Eustace filing lawsuits against voters who ‘transferred under doubtful circumstances’ 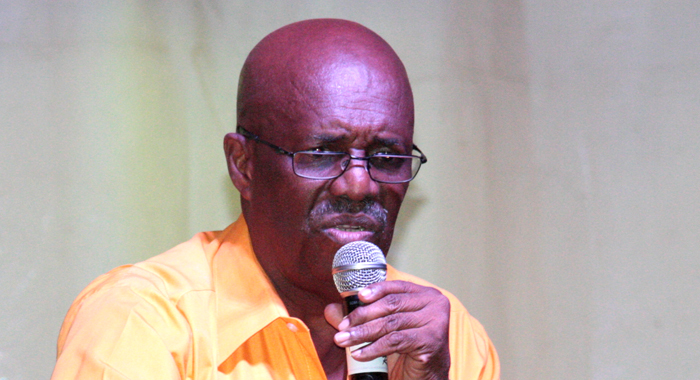 Leader of the Opposition Arnhim Eustace says he has instructed his lawyers to take legal action against persons whom, he said, have transferred their voter registration to East Kingstown “under doubtful circumstances”.

Eustace, who is president of the New Democratic party (NDP), made the announcement on his weekly radio programme on Monday in which he called the names and particulars of some persons who he accused of violating the election laws.

“I am going to say clearly that I have great concern about the efficiency and integrity of the process of registration that I have seen so far where East Kingstown is concerned. I also have concerns about the registering officer herself,” he told listeners.

Among the persons, he named a minibus driver who registered as living in Richmond Hill.

Eustace, however, said that the man lives in the Central Leeward village of Buccament.

He said the information given to him by his team is that the man used to drive a minibus in the Murray Village/Rockies area, but never resided in Richmond Hill and is actually living in Layou.

“But he is registered to vote in East Kingstown,” Eustace said.

He also spoke of a woman, whose address is given as Frenches, who was transferred from West St. George.

But Eustace said the woman,  an early childhood teacher, lives in Belair near the West St. George Secondary school.

Eustace explained that she is living in Dorsetshire Hill, but on the right hand side of the road, which places here in West St. George.

He also mentioned a farmer, registered as living in Sion Hill, who was transferred from West Kingstown.

“These people have been transferred and actually some of them have been removed from the list in their old area already, but they are not living in East Kingstown,” he said.

“There are other names that not only my team, but other teams are investigating,” he said.

“I have some more already, which I will not release today. I want to be quite sure when I do that. But I have already had a meeting with legal counsel last Friday to begin the process of prosecution of these individuals, including the registration officer.

“We are not going to take this matter of violating the rules lightly or breaking the law. The New Democratic Party will be very firm in this matter. I have given instructions in relation to legal action already last Friday on those whose names I have announced. And I am not leaving out the registering officer in this matter,” he said.

Eustace said when one wins an election, “it is expected that you win in free and fair elections.

“And I am not waiting ‘til polling day or after the polls close. We are going to take action now in relation to these matters,” he said.

Eustace expressed disgust with the alleged illegal voter transfers across the nation.

“I am tired of this type of deception. It is against all the norms that we will expect in free and fair elections,” he said, adding that he will bring to the attention of the public regularly persons who are violating electoral laws, especially in relation to registration and transfers.

“I will be taking legal action in relation to anybody, including the registering officer, who we find violating the rules and the law.”

He said the NDP has teams in the constituencies examining the list of transferred and first-time voters.

He said that in East Kingstown there are over 600 new registrants and 200 transferees into the constituency.

In South Leeward, new registrants exceed 800 and there has been a series of transfers, he said.

Eustace noted that his opponent, the Unity Labour Party’s Luke Browne said at a campaign rally in Chateaubelair on Sunday that he was confident that the ULP will win East Kingstown.

“I just want to say that we, in the New Democratic Party, and we, in East Kingstown, we are doing our work and we are confident about the result that we are going to get on polling day,” Eustace said.