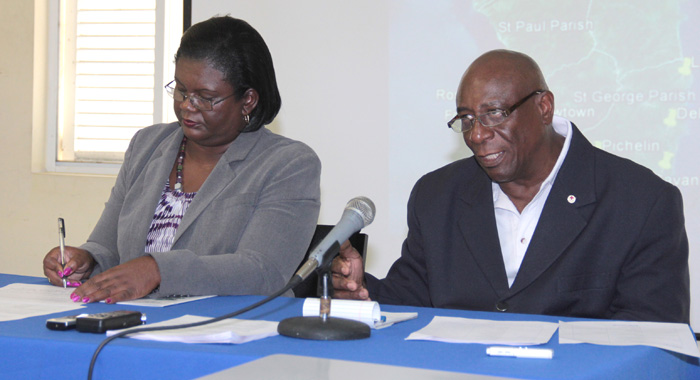 Michelle Forbes of NEMO, left, and Bernard Marksman of the SVG Red Cross have urged donations to Dominica. (IWN photo)

Vincentians contributing to the disaster relief in Dominica are being asked to pay attention to the list of requested items.

Deputy Director of the National Emergency Management Organisation (NEMO), Michelle Forbes, told the media on Wednesday that while the public is being asked to contribute to the relief effort in Dominica, only things on the list of required items will be accepted.

Dominica needs assistance after the passage on Thursday of Tropical Storm Erika, which left 25 persons dead and several missing and million of dollars in damage and loss.

NEMO and the SVG Red Cross will be collecting donations of the following items from the public:

She said NEMO is still approaching other supermarkets to collect items for the relief effort.

She noted that St. Vincent and the Grenadines has been impacted by several natural disasters over the past few years, at which time, Caribbean nationals responded to the needs of Vincentians.

She said many people are homeless in Dominica, and asked that every Vincentian give what they can.

Forbes said that the recovery process will be long and asked for prayers for Dominica as they rebuild their Nature Isle and get back on their feet.

Speaking at the same media conference, Bernard Marksman, director general of the SVG Red Cross Society, said that normally, the Red Cross, based on its international mandate, would have launched it own appeal.

He, however, said it is prudent to join hands with the efforts in the rest of St. Vincent and the Grenadines.

He said the Red Cross in Dominica has said that assistance with assessment and relief will go a long way.

Citing, the list, Marksman said the Red Cross is looking for those things that the Dominican public needs immediately.

He urged that persons pay attention to the expiry date of canned food, saying that persons should not donate items that have expired or are close to expiry.

He said while power washers are expensive, they are needed to clean mud from inside houses.

He said that from the standpoint o the SVG Red Society, they have had a difficulty with people offering clothing that “are not worthy of being worn”, or clothing that has been lying in a storeroom for a long time.

He said the last time the Red Cross received donations of clothing, they had to dump four garbage truckloads.

“… generally speaking, too much of the clothing that we get cannot be used,” he said, adding that it takes a lot of time, effort and money to sort clothing.

“I want to appeal to the Vincentians public to give of their best because we received of other people’s best when we had our situation,” he said.

The two agencies are hoping to ship the items t Dominica on Wednesday.
Forbes said they are hoping to send a 20-foot container filled with food supplies, adding that there are opportunities to send more aid after Wednesday.