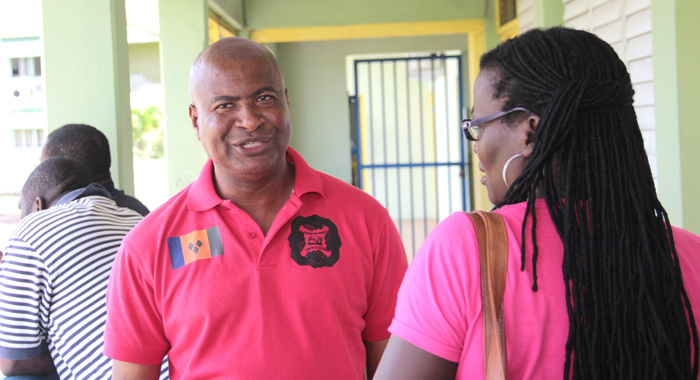 The leadership of the Teachers’ Union on Wednesday received a mandate from the general body to demand that the government pays them one month’s salary in lieu of salary increases since 2011.

“Be it resolved that this body endorses the demand made by the SVGTU; and be it further resolved that the SVGTU will engage in all necessary action to bring national, regional, and international attention to the situation; and

be it further resolved that the SVGTU calls on the Government to favourably consider the unions’ demand,” a resolution passed at the meeting said.

Speaking to I-Witness News after the meeting, President of the Teachers’ Union, Oswald Robinson, said the meeting was “a good meeting.

“The teachers expressed in passion and gave us a mandate to demand. We are in a different mode now. We are not requesting anymore we are demanding,” he said.

Teachers and other civil servants have not received a salary increase since 2011.

The Teachers’ Union, along with the Public Service Union, has been spearheading efforts to get the government to pay them one month’s salary, tax-free in lieu of the increases.

The National Workers Movement, and the Commercial, Technical and Allied Workers Union, which are led by Noel Jackson and Joseph Burns Bonadie, both of whom advocate on radio on behave of the government, also support the proposal.

Robinson did not disclose the timeline that the union will give the government to meet the demand.

Asked what factors were considered in arriving at the decision to demand that the government makes the payment, Robinson said:

“Teachers are getting poorer everyday. The expenses are far more than your income, the rest of the society is moving up and the teachers’ salary is stabilised. We have a wage freeze for so long and we have made that sacrifice, we have exercised patience.”

He further said the government has said that the unions’ proposal is reasonable.

But when it was noted to Robinson that the government has said that they are not in a position to make the payment, which will amount to EC$25 million, Robinson said, “But they are in a position to pay other things and deal with a lot of stuff they are dealing with.”

He did not itemise these things, saying they are things “which we value” and have been reported on in the media.

“They have a lot of things to do, but as a trade union we have to look out of our membership and make sure that justice is being served,” Robison told I-Witness News.

2 replies on “Teachers’ Union gets mandate to demand salary payment”