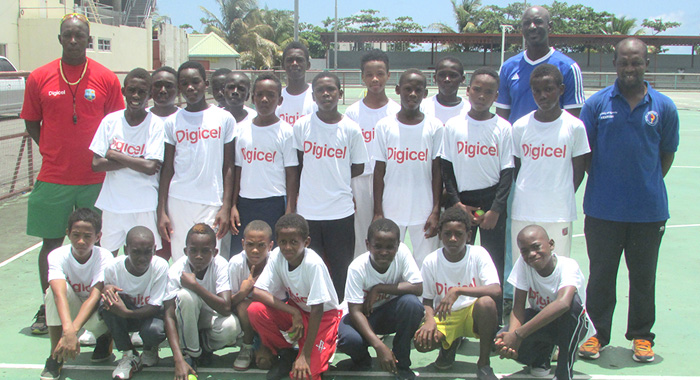 The St. Vincent and the Grenadines Cricket Association (SVGCA) in collaboration with Digicel have successfully completed the Digicel T.I.P Cricket Camp.

The two-day camp, which ended on Tuesday, included 25 players who were selected from talent identification drives in St. Vincent.

The talent identification programme (T.I.P) was a mastermind of President Kishore Shallow and his executive with the prime aim of recruiting young cricket talents 9 to 15 years old.

“The intention was to widen our pool of young cricketers, and begin to nurture them from an early age to increase their prospect of going on to represent our country at all levels,” Shallow said

The 2-day camp was held at Arnos vale sporting complex, and was led by a technical team of Stanley Hinds, Deighton Butler, Irvin Warrican, and Cleton Burnett.

“It was great to have our top coaches in the island involved in the programme, and working with our future cricketers. The feedback from the young players were very encouraging, they are already keen and ready for the next camp; this is an initiative that my executive will maintain and continue to expand,” Shallow further commented.

Later this month, the SVGCA will launch a mentorship programme for national under-15 prospects for the 2016 tournament.