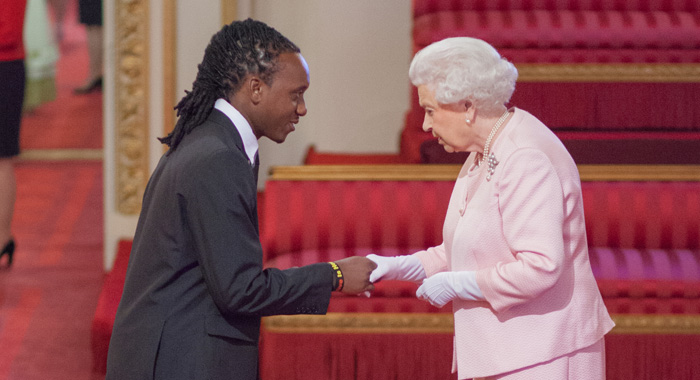 Vincentians 18 to 29 years old who are using their skills to assist their communities are being encouraged to apply for the prestigious Commonwealth Queen’s Young Leaders Award.

Vincentian Kenville Horne, a 2015 Queen’s Young Leader awardee, said he would love to see another of his compatriots among the awardees next year.

Horne was this year selected among 60 young persons from within the Commonwealth to win the award in its first year.

He was the only person from St. Vincent and the Grenadines and one of eight youths from the Caribbean to do so.

The Queen’s Young Leaders Award recognises and celebrates exceptional people aged 18-29 from across the Commonwealth, who are taking the lead in their communities and using their skills to transform lives.

Winners of the award receive a unique package of training, mentoring and networking, including a one-week residential programme in the United Kingdom, during which they will collect their Award from The Queen.

With this support, award winners will be expected to continue and develop the work they are already doing in their communities.

As well as awarding inspirational young people, Queen’s Young Leaders Grants will be made to organisations in selected Commonwealth countries that can show they are improving the lives of young people.

The vision is to provide opportunities for young people to learn new skills, enter employment, and give them a voice in their communities.

Horne, a reporter at The Vincentian newspaper, won the award for starting a sport-based programme, the Kenville Horne Sports Academy, for at-risk and disadvantaged youths in Rose Hall.

Horne says he endured a terrible past but was able to overcome his challenges before going back to his community to assist the youth.

He lives in Lowmans Hill but makes the 80-minute journey each week to help shape the lives of the youth of Rose Hall.

The main objective of the programme is to help the youths avoid idleness and develop into productive adults, Horne said.

“It is very sad when you see our future going down the wrong path. Sometimes I hear people say that we have to shape a good world for the youths, but I believe that we need to shape good youths for the world,” Horne said.

Horne is undergoing a one-year online scholarship from the university of Cambridge in England.

In June, he travelled to the UK for a one-week residential programme, where he and the other Young Leaders visited Prime Minister David Cameron at 10 Downing Street, the Twitter UK headquarters and the BBC World Service.

Additional he visited Buckingham Palace, where he collected his award from Queen Elizabeth II.

Horne said the award has offered him an insight into youth development and leadership that he could have never imagine.

He said he has been working on building his network, based on the important contacts he has made while in England and the generous businesses that have been showing interest in helping with the develop of the youths.

He said he would like to see his programme grow to include more youths.

“It is imperative that young people become involved in community development, because the community is where we need to start if we are to create meaningful change among our youths,” Horne said.

For more information on the Queen’s Young Leaders Award, visit www.queensyoungleaders.com or #thesearchison.