Teachers urged to put their union before their political parties 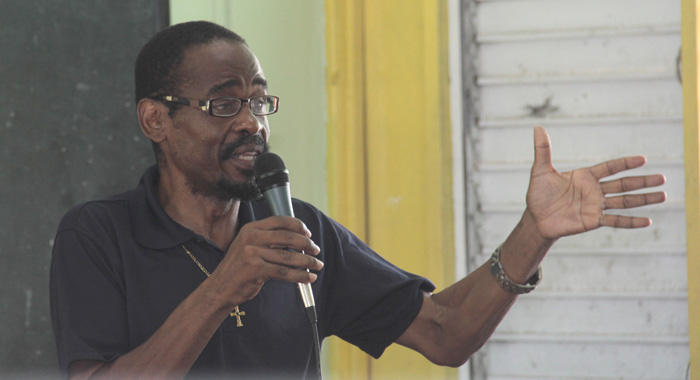 A long-standing member of the St. Vincent and the Grenadines Teachers’ Union is calling on his colleagues to put their political sympathies aside and support the union in its bid to secure for teachers one month’s salary in lieu of salary increases since 2011.

Philbert “P-John” John, deputy principal of Central Leeward Secondary School, told a meeting of the union in Kingstown on Wednesday that the political climate that has emerged in the country over the last 15 years is one where people think of political implications before the trade union.

“But history has shown us when it comes to the union we should forget about our party. Because when our party is in opposition, they will support and embrace everything that we do. When our party gets into government, we are dealing with a different animal. We, as teachers and educators, must understand that,” John said in his contribution to the discussion.

The Teachers’ Union, along with the Public Service Union, has been spearheading efforts to get the government to pay them one month’s salary, tax-free in lieu of the salary increase.

The National Workers Movement, and the Commercial, Technical and Allied Workers Union also support the proposal.

John told the teachers that they should support the party of their choice, but noted that when it comes to bread and butter issues, political parties see country rather than union and have other priorities.

He urged every member to support the executive in pursuing the one-month salary.

John said he has started to write an article about the implications of living four to five years with the same salary while all other expenses are increasing.

“There is not even an adjustment for the cost of living,” he said, adding that teachers are going into a fifth year without any adjustments.

“We have been asked and we have willingly sacrificed and borne the burden of the fiscal and economic challenge that the country is facing.

He said that other things are happening and other expenses being met in the country.

“… but there is no effort to relieve the situation with workers, going into five years,” he said to more applause.

John noted that some persons argue that things are difficult all around.

He, however, used the case of how teachers in Jamaica and that country’s government responded to a salary increase proposal.

“Every move the Minister of Finance makes in Jamaica must have the blessing of the IMF,” John said, adding that the IMF has a tendency to demand that governments suppress wages.

“But even as the IMF is watching Jamaica, Jamaican civil servants made demands for increase and the government did not say no. They offered what the civil servants and teachers in Jamaica considered to be not enough. And then there were negotiations. And my last information suggests and at a recent convention of the Jamaica teachers Association, they agreed to accept what the government was offering.

“We are constantly being told that the government cannot afford and being called to a meeting where the last thing on the agenda is salary increase, but other items are discussed extensively. … There is nothing much discussed, there is no figures given to them about the government’s fiscal situation, there are no projections being made,” John said.

He noted that the 2015 Budget includes monies for 50 positions in the security services.

“No one discussed with us the financial implication of that,” he said, adding that that was more of a priority than giving teachers a 1 or 2 per cent salary increase.

“I am urging you to support the executive in tis quest for this kind of relief,” John said, adding that it will take “nothing much from the government. It is one-off.

“… they are not saying anything. They are simply saying 25 million dollars? We can’t afford that. And no matter what permutations the executive comes up with, they the still reject it. But we have to demand it. We have to demand it…

“What the union is asking for has no benefit on your retirement benefits. And what each of us should be doing now is making sure that we retire in the best situation possible. Every year we go without a salary increase is a dollar less on our pension and gratuity and I want people to understand that.

John said he understands that the union doesn’t want to appear as if it is making too many demands on the government.

“That is why I say what the union is asking for is more than reasonable. In fact, it is not enough. That is why the government should positively consider making the one-month payment,” he said.

The meeting, which heard other presentations, including from Curtis King, principal of St. Vincent Grammar School, mandated the leadership of the union to demand that the government makes the one-month salary payment.