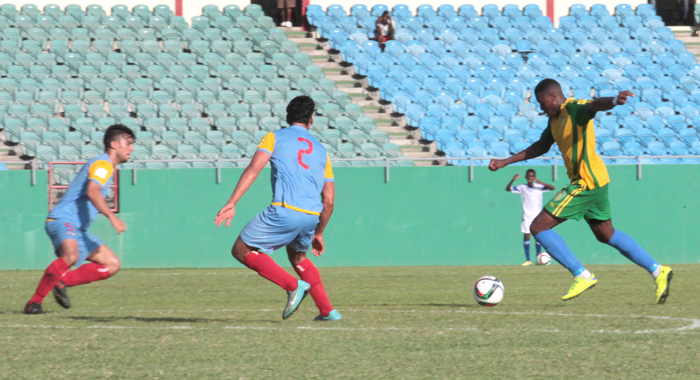 St. Vincent and the Grenadines senior men’s football team, “Vincy Heat”, left the country on Sunday for Aruba to take on that country in the return leg of the Russia 2018 World Cup Qualifier in the CONCACAF Zone on Tuesday.

The Vincentians, behind goals from Tevin Slater and Olaex Anderson, won the first leg 2-0 on Friday at the Arnos Vale Sports Complex.

The winners will advance to the next round, where they will meet, the United States, Trinidad and Tobago and the winners of the tie between Antigua and Guatemala in November. Antigua won the first leg 1-0 at home on Friday.

Vincy Heat coach, Corneilus Huggins, though welcoming the result of the game on Friday, said he was unhappy with the performance of his team.

“Not impressed. I am not impressed at all,” Huggins said in a post- match interview with I-Witness News.

“I do not think we played as we should have. There were a number of issues and chief among these was that the midfield was too far from the strikers most of the time and this allowed Aruba to close on down and get some possession. We have to do better than that. We won, yes, but we did not play a good game.”

Huggins said that there were some good periods and the 2-0 margin should have been more like at least 4-0 victory. He, however, said the team came out with a victory and two goals and they would be looking to build on it in Tuesday’s return leg.

SVG, who looked the more positive and better of the two teams, began at a brisk pace in the sweltering conditions, which saw the officials instituting a series of water breaks for the teams, as per FIFA new regulations.

The home team should have taken the lead in the fifth minute of play when they were awarded a penalty when the nippy Anderson was brought down in the area. But the resultant penalty was well saved by Eric Abdul in the Aruba goal — going to his right and parrying the ball away.

“Missing that penalty really got me down but I tried to put it behind me and play for the team but I was not able to play to the level I am accustomed. I will say that it was one of my worst games for my country I have ever played,” said Stewart, who was substituted in the 78th minute.

With both teams battling the high temperature, the play became a bit scrappy and a welcome water-break came at about 23 minutes into the game, with the players promptly heading for the touchline to replenish their obviously spent energies.

On resumption, the game picked up pace and the visitors were the ones took the initiative with some quick short passes that created some nervous moments for the Vincy Heat. Erik Santos de Goviea, showing some good touches, created some level of panic but his weak show was easily collected by Winslow McDowall in the SVG goal, while David Abdul also found plenty of space only to blast over the bar from just on the edge of the area.

Vincy Heat also had their chances and was just mere metres from going ahead when a shot by Slater beat the Aruba custodian but hit the upright and rebounded in his grasp.

The teams went into the break 0-0 with the Vincentians, though not on the score sheet, looking the team most likely to go ahead.

On the resumption, the Vincentians began as they did the first half and with the 15 minutes break seeming not enough time for the visitors to recharge, they were left scrambling as Anderson outran his marker, went past another, before slipping the ball across the goal for Slater to beat Abdul with a low, well-taken right foot shot. This goal was greeted by loud cheers by the 3,000-plus fans who had battled the snail-paced claustrophobic traffic jam and sweltering heat to support their team.

The goal was one of relief for the players and coaching staff, who were becoming more agitated and frustrated by the team’s failure to score.

In the 62nd minute, the Vincentians made their first substitution with Gavin James being replaced by Vasbert Ledger and Aruba bringing in Nickenson Paul for Gregorio van der Biezen.

The game picked up pace following more changes from both teams and it was the Vincentians who turned up the heat with a series of attacks on their opponents’ goal.

And following another water-break, Anderson collected a ball midway in the Aruba half, slipped passed two defenders then played the ball across the goal to Nazir Mc Burnett only for the striker to miss the open goal.

The Vincentians continued moving forward and were rewarded when Anderson, on another run, was brought down in the area with referee Rodphin Harris authoritatively and confidently pointing to the spot in the 90th minute.

Anderson duly put away the spot kick to give SVG a 2-0 lead.

The scoreline remained that way even though four minutes were added.

Coach Huggins, speaking on Saturday at the team’s final training session, before leaving for Aruba, said that the team will be going to the away match with the sole objective of a victory.